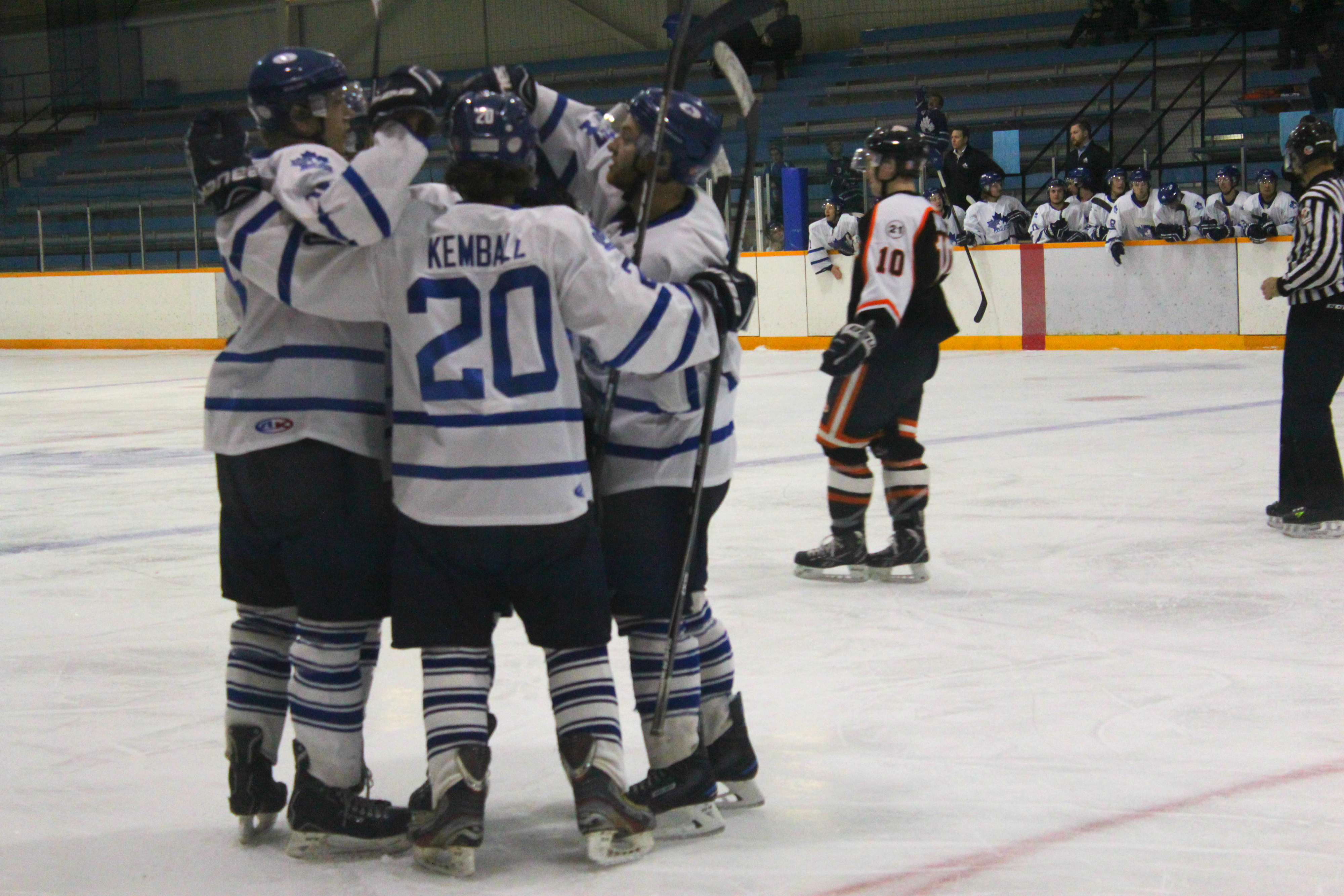 The Canucks came into their remaining two games of the 2016 calendar year winners of three in a row and four of their past five. The countdown to the holiday break started with a game at Terry Sawchuk Arena against the River East Royal Knights on Dec. 16, 2016.

The Canucks would come out on top in a wild 8-6 game, which saw multiple goal games from Mitchell Lockhart, Nick Stire and Tyler Meixner.

The Royal Knights would strike first just 4:46 into the game to make it 1-0 but the Canucks answered back right away, scoring twice in a two minute span. Mitchell Lockhart netted his team leading 16th of the season on the power play with assists from Meixner and Adam Thurlbeck. A short time later Shane Bigourdon knocked home his sixth to make it 2-1 Canucks. The lead didn’t last long, however, as the Royal Knights scored twice in the final eight minutes to take a 3-2 lead into the locker room after the first period.

The Canucks came out flying in the second, scoring twice in the opening five minutes. Tyler Meixner scored his ninth of the season and first of the game at 3:29 followed closely by Lockhart’s second of the game at 4:52. The Royal Knights didn’t go away though, answering right back with two goals of their own. A late power play goal from Nick Stire tied the game at five, which is where the two teams sat after 40 minutes.

Lockhart would score his third of the game at just over the midway mark in the third to give the Canucks a 6-5 lead, followed by Stire’s second to make it 7-5. The Royal Knights would get within one but Meixner scored his second of the game on the power play late in regulation to ice the 8-6 win.

The big guns were firing for the Canucks, as Lockhart (3G 2A) Meixner (2G 3A) and Stire (2G 2A) combined for 12 points in the game. They are the top three point-scorers for the Canucks this season. Defencemen Graham Philp and Justin MacKinnon also got in on the action with a pair of assists each.

The win brought the Canucks’ record to 16-8-1 on the season, and had them in a tie for first place with the Pembina Valley Twisters.

Next up was a home game on Dec. 23, 2016 to finish off the unofficial first half of the season against the Ft. Garry/Ft. Rouge Twins. At the game, the Canucks would take the opportunity to honour a long time volunteer who unfortunately passed away earlier this year. 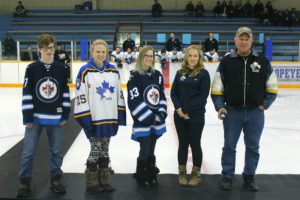 The family of Melissa Egilson was in attendance for a ceremonial puck drop before the game. Egilson was a volunteer who did a lot for the team including selling 50/50, taking photographs and helping with the annual Canucks dinner. We want to take a moment to thank her family for helping us honour her ahead of the game and we wish them a happy holiday season. To learn more about what Egilson meant to the team, click here.

The Canucks outlasted the Twins for a 6-3 victory to carry a five game winning streak into the holiday break.

Lockhart got things started at 16:23 of the first period when his shot deflected off a Twins defender and in the net. The unassisted goal was Lockhart’s team leading 19th of the season and the Canucks led 1-0 after a quiet first period.

The second period was the opposite, as the teams combined for seven goals. Chis Vallance would get things started in the middle frame with his fourth of the season to make it 2-0. The Twins’ Cole Zadro would cut the lead to 2-1 at 9:09, but Vallance answered back with his fifth of the season at 10:17 to restore the two goal lead. The Twin’s wouldn’t go away though, as Zadro scored his second of the period to make it a 3-2 game at 12:02.

Stire would make it 4-2 at 14:08 but once again the Twins answered back a short time later, cutting the lead to 4-3. Tyler Meixner scored a goal with less than a minute left to give the Canucks some breathing room and they carried a 5-3 lead into the locker room after 40 minutes.

The third period would be much quieter as Lockhart potted the only goal on the power play to ice the win for the Canucks. It was Lockhart’s 20th of the season, assisted by Stire and Meixner. It’s the second straight year Lockhart has crossed the 20-goal mark.

Nathan Cvar picked up the win in net stopping 25 of 28 shots. His record is now an impressive 9-1 on the season.

The win improved the Canucks record to 17-8-1 and put them in a three-way tie for first place with Charleswood and Pembina Valley at the holiday break.

3 – Nick Stire: Stire had three goals and four assists during this two game stretch and is now second in team scoring with 27 points in 21 games. He has points in six of his last eight games.

2 – Mitchell Lockhart: Lockhart has been pacing the Canucks offence all year and with five goals and two assists in this stretch he now has 20 goals and 37 points in just 24 games. He’s on an eight game point streak with nine goals and 14 points in that span.

1 – Tyler Meixner: Meixner has been on fire with 11 points in his last six games. In this two game stretch he had three goals and five assists.

The Canucks players, staff and volunteers will be taking a break until the new year to spend time with friends and family. The Canucks get back into game action on Jan. 3, 2017 when they host the Raiders.