The St. James Canucks signed forward Kieran Ursel for the 2017-2018 season today at The Silver Heights Restaurant and Bar.

Ursel spent this past season with the St. Paul’s Crusaders of the Winnipeg High School Hockey League (WHSHL) and led the team in scoring with 16 goals and 30 points in 23 games. He led the Crusaders to a 20-2-1-1 record during the regular season and helped them win the city and provincial championships. 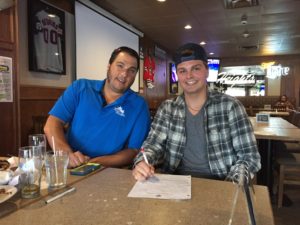 In 2015-2016 Ursel played for the AAA Winnipeg Hawks and finished with 30 points in 36 games and six points in nine playoff games. In 2014-2015 he spent the season with John Taylor Collegiate, scoring twice and adding nine assists in 21 games.