On Friday, January 22nd, the St. James Civic Centre celebrated its 50th birthday. In front of 600 fans, the St. James Canucks hosted the Fort Garry/ Fort Rouge Twins and the Canucks were planning a special celebration. The team was also celebrating “Community Club Night” in which all St. James minor hockey players 14 and under got in free. The Canucks were serving cake to all fans in attendance; every minor hockey player received a free pizza coupon from Boston Pizza on arrival and there were 25 different prize packages given away at the game including Winnipeg Jets and St. James Canucks jerseys, sticks, framed pictures of Jets players along with Canucks gear and memorabilia. Boston Pizza’s mascot Lionel was in attendance to hang out with the minor hockey players so it really was one big party.

Before the game, many dignitaries were on hand to share the special celebration. Premier Greg Selinger, Assiniboia MLA Jim Rondeau, St. James MLA Deanne Crothers and City Councillor Scott Gillingham were among the few to share the special occasion. There were also several players from the first ever game in 1966 on hand to take part in the pre-game ceremonies including Lynn Kaltenberger, Don Keatch, Allan Plesh, Doug Sproule, Jim Stewart, Gary Young, Gary Yelland, Gary Frost and Doug Titery and Alderman Gordon Keatch.

Next was the ceremonial faceoff. Former Chairman Al Mackling and Co-Chair Frank Johnston dropped the puck for the two captains Tyler Arnason (Canucks) and Jake Heisinger (Twins) and both teams were set to face off. It didn’t take long for the Canucks to get on the board as Mitchell Lockhart scored just 4:18 into the first period. This was the first goal scored after the 50th birthday. The goal was assisted by Tyler Meixner and Graham Philp. In between periods Lockhart was given the puck in a special ceremony. This puck will go up in the Civic Center’s trophy case beside Jim Johnston’s first ever goal.

The Canucks never looked back as they peppered the Twins all night with a total of 50 shots. Mitchell Lockhart scored a hat-trick, Jeremy Idzikowski, Ashton Fogarty, Mathew Carrey, Nick Stire and Tyler Meixner also scored to give the Canucks an 8-0 convincing win. Tyler Wiess made 26 saves for his first career shutout. Scott Gallaher and Devan Lobb both brought the crowd to their feet in the third period as Lobb dropped the gloves with the Twins Colton Plante and Gallaher with Mack Cardinal.

All in all it was a fantastic night. The night was MC’d and organized by Canucks Past President Tom Miller and a special thanks to Fred Morris who spent countless hours in the planning and organizing of the event. It would not have been made possible without the efforts of Tom and Fred. 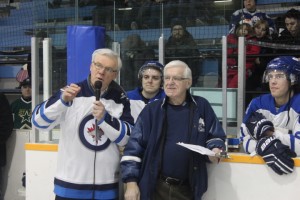 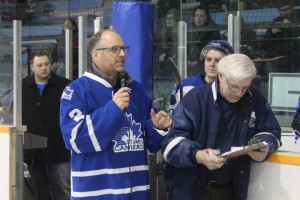 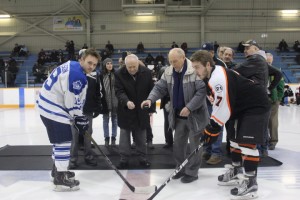 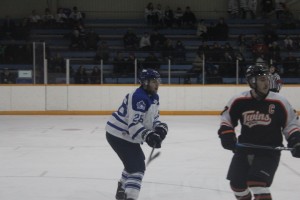 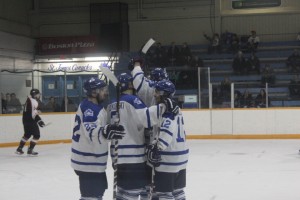 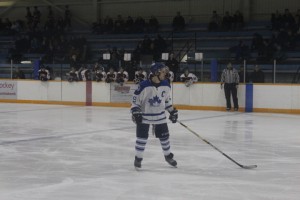