The Canucks looked to bounce back after last weekend where they failed to pick up any points. Friday nights challenge would be extremely difficult as the team hit the road to Morris to take on the Twisters. The Twisters are typically top 3 in the standings over the past few years so this would be a tough game for the Canucks.

The Canucks came out flying early and peppered the Twisters netminder in the first period. It was bad luck that struck Canucks in the first as an Austil Hill clearing attempt accidently went off a defenders skate and right onto the blade of a Twisters forward in the slot and he made no mistake. The Canucks bounced back after that as Jeremy Idzikowski scored his first goal as a Canuck on the powerplay to tie things up at 1. After that things went downhill for the Canucks. The Twisters would go on to win the game 6-1 even though the Canucks put up 39 shots. The puck just couldn’t find its way into the back of the net. After the game frustration boiled over in the dressing room but wiley veteran Scott Gallaher stepped up and exuded some of his leadership ability to calm the team down and turn their focus to Sunday’s game, reminding the team they have to work together and help each other out in order to achieve success.

On Sunday night, the Canucks were looking to snap their 3 game losing streak as they hosted the St. Boniface Riels. This was a see saw affair that went back and forth throughout the evening.

Nick Stire got the Nuckers on the board early as he scooped up a rebound and battled hard to score his 3rd of the season on the powerplay to go up 1-0. The Riels answered back 30 seconds later to tie it and that’s how the first period ended. In the second the offence finally broke out. Tyler Arnason scored back to back goals netting his 5th and 6th of the year. Mitch Lockhart scored with under 5 mins to go in the 2nd and the Canucks had a 4-2 lead going into the third outshooting the Riels, 32-12. In the third the Riels pushed back as they just wouldn’t go away. They scored to make it 4-3 before Wyatt Kemball awnswered with his 5th of the season on a great individual effort to restore the two goal lead. The Riels would score just 3 minutes later and then Austin Hill scored his 3rd of the season on a goal that may be the play of the year to date. A beautiful passing play executed as Lockhart made a blind feed to Hill who went in all alone and tucked it in the five hole with a quick backhander. The Riels would answer a minute later to make it 6-5 and the final two minutes would leave the fans on the edge of their seats. With 10 seconds left to go in a mad scramble in front of the Canucks net, David Friesen covered the puck in the crease and you know what that means….a penalty shot! Nucks goalie Luke Ushakas took the angle away as the Riels player hit the post and that was it, Canucks win!

Goes to show the hard work it takes to get out of a slump. The team was happy with their effort this weekend even though they only got 2 of a possible 4 points. The Nuckers posted 81 shots over the course of 2 games so most importantly the effort was there. The team will practice Monday and Wednesday this week before the second game of their 3 game homestand goes Friday when they face the Fort Garry Twins and Sunday when they face the red hot St. Vital Vics. 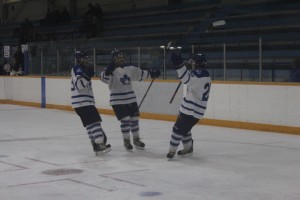 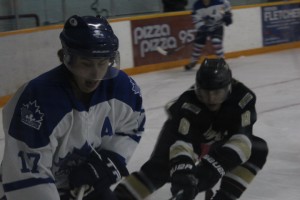