The Canucks headed into this weekend’s action red hot, riding a four game winning streak. The team was playing well showing a great work ethic and playing as a 20 man unit night in and night out. The first test vs the Charleswood Hawks on Friday night at the Eric Coy Arena, would prove to be a very tough task considering the Hawks had yet to lose a game in regulation time. Only a bridge separates these two communities from each other and this has been one of the best, most intense rivalries in any league you will find in Manitoba!

Once again the Canucks came out firing, throwing a barrage of shots at the Hawks net. The Nucks had a few golden opportunities to jump out in front but they just couldn’t pull the trigger. It was the Hawks who held off the surging Canucks and came back with a goal late in the period to go up 1-0. Shortly after, the Nucks took a penalty and the Hawks pounced with their patented “bank off the back boards” and in the net to enter the first intermission with a 2-0 lead. In the second period the Hawks picked up where they left off scoring 2 minutes into the period. The Canucks continued their undisciplined play and the Hawks buried 2 more on the power play and added another. In a four minute span the Hawks scored 4 unanswered goals and took a 6-0 lead! Ushakas got the hook after four goals and Wiess came in under fire and after allowing the first 2 goals settled in until the team got its bearings. At this point the Canucks could have packed it in or stick together and fight back. And besides Papaioannou who left the game with the flu and Gallaher who got thrown out for giving the ref some lip service, the team fought back scoring 2 goals the rest of the way to make the game respectable. Ashton Fogarty scored his 4th of the campaign and Christian Vallance scored his first as a Canuck with a nifty little forehand to backhand deke. Both goals were scored off beautiful feeds from Devan Lobb. To summarize the game, missed opportunities early on, and 7 minor penalties which led to 3 of the Hawks goals were reasons for defeat. And just like that the flames burning red hot from the Nucker wagon were extinguished by the Hawks.

Sunday night would bring a fresh start, a chance for the Nuckers to hit the reset button and forget about the game that got away from them Friday night. A chance to let the league know their hot start was no fluke. The “lowly” Transcona Railer Express came to the Civic Centre and the Canucks players may have thought 2 points would be handed out on arrival to the game. However in the MMJHL you have to come every night to play, and for some odd reason, the Canucks just did not have it. Like something had sucked out all their energy the night before. What a mystery???

There was no mystery on the Railer Express bench, who came to prove that they are not so “lowly” after all. They came ready to work and outworked the Canucks for most of the night earning a 7-4 victory. The Canucks once again took bad penalties at inopportune times and gave up another 3 power play goals. The Railers got out to a 2-0 when Vallance scored his 2nd in two nights on the power play off a Philp point shot. But as the Canucks got close they took a too many men on the ice penalty that led to a Railer power play goal and then another, before Derek Walker would answer on the powerplay late in the second period to cut the Express lead to 4-2. The Canucks battled back again as Mat Carrey scored his 3rd of the season to cut the lead to one but 2 minutes later the Express regained the 2 goal lead. Ashton Fogarty scored his 5th of the season but that was not enough as the Nucks fell 7-4 to the Express. After the game coach Mooney seemed puzzled as to why the team was unable to respond after Friday’s loss. “It’s not the result that bothered me as much as the effort in tonight’s game. We simply got out worked and it’s something I haven’t seen yet from this group. We take some bad penalties early on and we find ourselves down 2-0. Then we are chasing the game and it felt like that the whole night”.

So the Canucks hit a stumbling block this weekend, but the potential is there and team General Manager Gavin Mclachlan is very optimistic about the future. “We need to put this weekend behind us and move forward, simple as that. We played some real good games and showed a lot of heart. This team sticks together and plays for each other and that’s a great sign. We went 5-4 so next round hopefully we can improve and go 6-3 or even better. The boys just have to realize we need the same effort and enthusiasm every night and we are a deep enough team to be successful”.

The schedule doesn’t get any easier as the Canucks head out to Morris on Friday with a date against the Pembina Valley Twisters before coming home Sunday to face the St. Boniface Riels. 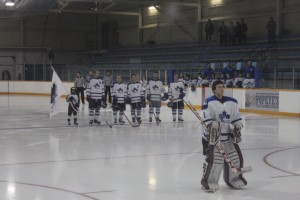 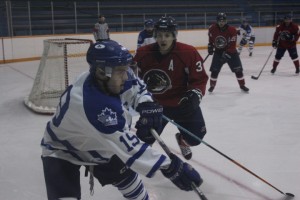 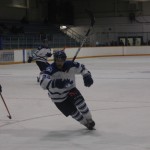