Last week saw the Canucks in action with two very tall tasks of defeating teams above them in the standings. The first game was Friday at the brand new Seven Oaks Sportsplex as the Canucks took on the perennial powerhouse Seven Oaks Raiders. The Raiders have been to the Championship finals the past two seasons (winning once), and returned most of their players from last season in search of winning another championship. The Canucks knew they were in tough and would have to play a full 60 minutes to be successful. Before the game coach Mooney emphasized using speed to the teams advantage and the Nucks did just that. Although the Raiders scored the opening goal, the Canucks answered back as Nick Stire scored on the powerplay to tie it up with his second of the season and Wyatt Kemball scored his 3rd of the season with 5 seconds left in the period to give the Nuckers a 2-1 lead going into the break. The Canucks continued to use their speed to draw penalties in the second which led to powerplay goals by Derek Walker and Graham Philp, both their firsts of the season to put the Nucks up 4-1. The Raiders made it 4-2 later in the period and that’s the way it stood going into the third. The Canucks played a smart defensive game in the third and when the Raiders pinched to try and make the game closer Tyler Arnason cashed in for the Nucks scoring a beautiful goal off of a feed from Austin Hill on a 2 on 1. The Canucks never looked back and sealed the deal with a big 2 points, defeating the Raiders 5-3. Kurtis Brakel turned away 31 of 34 shots to get his first win of the season. Derek Walker led the way in the statistical category with a goal and 2 assists, while Kemball and Hill each had a multi point night. Coach Mooney said he liked the way the team skated and that discipline in the third period was the key to success. “The only time we got ourselves into trouble is when we were in the box so we talked about the importance of discipline in the second intermission. Also our legs were really going tonight and we are starting to see team speed as being a real strength on this team, and it showed tonight.”

The Canucks enjoyed the Thanksgiving long weekend off with their families and were back in action at the Civic Centre Tuesday night against the Stonewall Jets. The Canucks continued their quick starts with a goal from Ashton Fogarty, his third of the season with a nifty deflection off a David Friesen point shot. The Canucks pushed the pace once again in the second period and Wyatt Kemball used his patience to walk out front of the net from the corner and bury his 4th of the season. The Canucks controlled most of the play in the period and it paid off late in the 2nd as Derek Walker came in on a 2 on1 and took the puck right to the net beating the Stonewall netminder to give the Canucks a 3-0 lead going into the third. In the third period the Jets started to push back as they tested Kurtis Brakel with a barrage of shots but Brakel made some big stops to help his team. Things started to get rough as some of the big boys from Stonewall started to bring some physical play along with some extra curricular activity after the whistle but the Canucks wouldn’t take the bait. Austin Hill added another goal, his second of the campaign with a slick breakaway goal that put the icing on the cake. Stonewall added a late goal but it wouldn’t matter as the Canucks hold on to defeat the Stonewall Jets, 4-1. On a down note Brady Orpin left the game in the second with what appeared to be a dislocated shoulder. Brakel stopped 31 of 32 shots to earn his second win of the season. Coach Mooney was pleased to see that each line contributed with a goal. “It helps when you have four lines rolling. It keeps everyone fresh and we are lucky we can do that because we have four lines that can push the tempo for 60 minutes”.

The Canucks showed this week they can play with any team in this league. The walked away with 4 big points this week and are looking to continue their 4 game winning streak on Friday when the head to the Eric Coy arena to face the Charleswood Hawks followed by Sunday vs the Transcona Railers at the Civic Centre. Puck drop for both games is at 7:30. 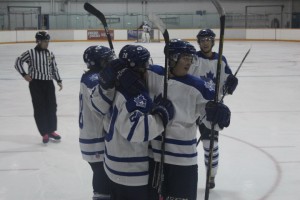 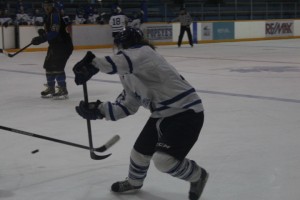 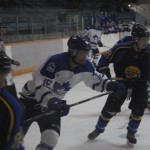