The Canucks headed into this weekend’s action facing two teams going in two different directions. The Nuckers had the rare benefit of playing in the friendly confines of their backyard at the St. James Civic Centre for both weekend games. The first was Friday against the Fort Garry Twins who had lost 8 straight going into the contest. The Canucks were trying to avenge an earlier season loss against the Twins and were looking to solve a Twins net minder for the first time this season.

Quick starts have been a key success to the Nuckers season so far and Friday night proved no different. The Canucks peppered the Twins goalie in the first and Mitchell Lockhart scored his 4th of the season to put the Nucks up 1-0 after 1. The Canucks took it up another notch in the second firing 18 shots on net. The Twins goalie stood on his head making save after save to keep his team in the game but couldn’t stop everything as Nick Stire scored his 4th on the power play to give the Nucks a 2-0 lead going into the third period. In the third the Twins pushed back a little but the Canucks added an insurance marker as Dylan Reinheimer notched his second of the season. This was well deserved as the line of Vallance, Carrey and Reinheimer were wreaking havoc on the Twins all night with their physical play. The Twins scored a late goal but it didn’t matter as the Canucks held on for a 3-1 victory. Tyler Wiess made 24 stops for the win and the Canucks made it two wins in a row.

Sunday’s game would be against a team trending upward as the St. Vital Vics came into this game playing some very good hockey. They had vaulted into third place over the past 2 weeks and were led by a potent offense. The Canucks would have to come out flying and they did just that. Wyatt Kemball got the Nucks on the board as he pounced on a rebound to make it 1-0. The young rookie has got off to a hot start as that was his 6th of the season. The Nuckers got themselves into some penalty trouble in the first but that didn’t matter as Tyler Arnason scored a highlight reel short-handed goal. He took the puck and went end to end blowing by the St. Vital defenseman and potting his team high 7th of the season. Wiess shut the door making 13 saves in the first and the Nuckers led 2-0. The second period was a see-saw battle as every time the Vics pulled to within one the Canucks answered right back. The Vics scored to make it 2-1 6 minutes in and 3 minutes later Austin Hill scored his 4th of the season to make it 3-1. The Vics pulled to within one again and this time Mitchell Lockhart answered with his 5th of the season putting the Nucks up 4-2 at the end of the second. The Vics made it close in the third and pulled their goalie for the extra attacker but Mitch Lockhart sealed the deal with an empty netter to give the Nucks the 5-3 win. Tyler Wiess stood tall once again turning away 22 shots for the victory.

The Canucks got a key 4 points this weekend and vaulted themselves into a tie for 3rd place with a record of 8-5. They have won 3 in a row and have scored 14 goals during that stretch. The penalty kill was a perfect 5 for 5 this weekend and the power play was a respectable 3 for 13. Coach Mooney was impressed about his team’s play. “The key this weekend is that we got off to quick starts in both games. You can’t underestimate getting an early lead at this level. When you have to chase the game you take chances and we were able to capitalize on those opportunities. Our PK was better and our goaltending was rock solid”. The Canucks look to build on their momentum this Friday at the Terry Sawchuk arena vs the River East Royal Knights. 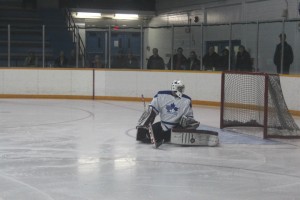 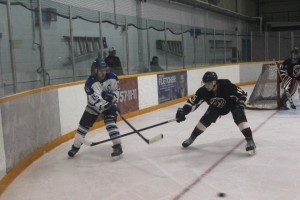 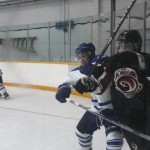 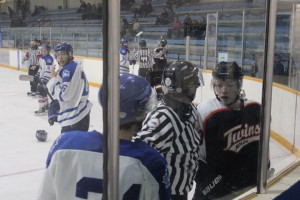 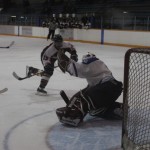