By Guest Reporter Allan Dust
As a guest of President Justin Steeves, I watched my first Canucks game since 2001 as they took on the River East Royal Knights at the Terry Sawchuk Memorial Arena. The first period started out quickly and Dylan Reinheimer delivered a thunderous check to set the early tone. Nick Stire opened the scoring with his 5th of the season on a nice feed from Mitchell Lockhart. The Royal Knights came back strong and scored on the powerplay on a shot from the point that a screened Tyler Wiess did not even see. Stire scored again late in the first when he tucked a beautiful shot under the crossbar to give the Canucks a 2-1 lead. The second period saw no scoring but there were chances at both ends. Wiess made an absolutely amazing save that President Steeves assured me was the save of the year, and may have been the turning point of the game. After that save, the Canucks seemed to push back but the Knights goalie, Matt Kohlman, made his own amazing save to keep his team the game. In the third period, the Knights started to become unglued and they took some ill-advised penalties. The Canucks scored an early powerplay goal and added another late. Devan Lobb scored his 1st of the season as he snuck in back door and got a nice feed from Mitch Lockhart. Tyler Arnason scored his 8th of the season unassisted. With the Canucks up 4-1, the Knight started to run around and with only a few minutes left Lockhart got mugged, which drew all the players on the ice into a scrum. Lockhart emerged from the pack with a dance partner and got into his first fight of the season. As the referees restored order, one of the Knights smashed Nick Stire’s helmet to the ice, causing President Steeves’ blood pressure to rise a little bit. He was last seen leaving to check on the condition of the helmet and to hand out an invoice if it was broken. The game ended without any more dramatics and a 4-1 victory for the Canucks. The Canucks played a fast and smart game, combining both skill and grit. They played a perfect road game and each line seemed to know its role and played within their system. I have no doubt that if they keep playing like that, and get the goaltending I witnessed in this game, they will go far this year. I am looking forward to my next game, and I will guarantee it will not take me another fourteen years to see it.

Sunday night brought a major challenge to the confines of the St. James Civic Centre. The first place Seven Oaks Raiders Jr came in without a regulation loss in 9 games going 8-0-1 in that stretch. Their last regulation loss was against the Canucks way back on Oct. 9th. The Raiders had hit their stride and the Canucks had put together a 4 game win streak themselves so this was going to be a barnburner. The Canucks also welcomed the bantam AA female Titans to their game as part of a team building outing.

The first 15 minutes of the first period was some of the best hockey you are gonna see at the junior level. The pace was fast and furious and the goaltending was rock solid. You know in a game like this it would come down to who makes the first mistake. The Canucks did just that with 3 minutes left in the first period and the Raiders jumped all over the opportunity and put the puck in the net to go up 1-0. Not even a minute later Devan Lobb went off for high sticking and the Raiders made them pay taking a 2-0 lead into the intermission. The Canucks would fight back as Nick Stire scored his 7th of the season from Austin Hill just 2 minutes into the second. The Canucks later took another penalty and the Raiders made them pay again with another nifty back door play and followed it up with another goal just 89 seconds later to put the Raiders up 4-1. The Canucks refused to quit as Wyatt Kemball played the old bank shot off of the stantion in the glass for his 7th of the season and the game was back in striking distance for the Nuckers. In the 3rd the Canucks got an early power play and David Friesen let go a cannon that beat Brown and the Canucks were within one. The Nuckers had all the momentum and began peppering the Raiders with shots until the Raiders capitalized off of a turnover in front of the Canucks net and banged home an easy one to put the game away. The Raiders went on to win 6-3. A lesson was learned today playing a stout team like the Raiders. You can’t make careless mistakes and you have to win the special teams game. The Canucks gave up 3 power play goals as their pk continues to struggle and a costly turnover for the Raiders 5th goal may have been a turnimng point in the game. Regardless, the Canucks know they can play with the Raiders and the season series is tied at 1 a piece. The team suffered a couple minor injuries as Dylan Reinheimer left the game with a possible sprain in his mcl and Nick Papaioannou left the game in the third with a mild concussion. The effort was there again for the Canucks and they hope to get back to their winning ways this weekend. The Nuckers will head out on a 3 game road trip before returning home on November 22nd. 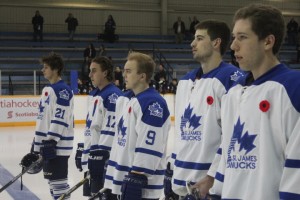 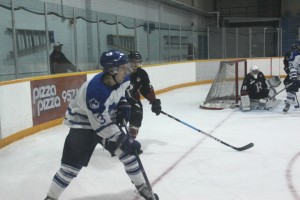 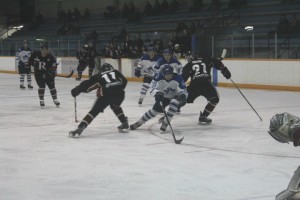