This weekend in the MMJHL was the showcase weekend where each team plays 2 games at the MTS Iceplex. It is an opportunity to showcase our league, for young players to come and check out what the league is all about. For the Canucks it was a crucial
weekend. A chance to get 4 points and to soldify 5th place for the time being. Many of the Nuckers who came from the John Taylor hockey program called the Iceplex home for their high school years, so you could see throughout the weekend the
comfortability level was high for those players.

On Friday the Nuckers took on the surging River East Royal Knights. The Knights were 3 points behind the Nucks have been playing good hockey over their past 10 games. The Nucks were looking for revenge after the Knights defeated them last at the Civic
Centre. The Canucks wasted no time as Nick Stire scored 37 seconds into the game, not even enough time for Director of Business Operations Jerry Jones to lock the team dressing room and get out to watch the game. The Canucks Gallaher took a penalty late
in the 1st and the Knights made them pay on the powerplay. Brakel had no chance as the shot from the point made its way through a pile of humanity and Braks couldn’t see a thing. The Canucks had a jump in their step this night as 2 minutes later Nick
Stire scored on an absolute lazer shot off a 2 on 1. Stire now has a career high 16 goals and counting. In the second period the Canucks continued to carry the play as recently converted forward Devan Lobb banked a shot in from behind the net for his 3rd
of the season to give the Nucks a 3-1 lead. One of the best team guys and hardest workers on the ice, Lobb has made a huge impact after coach Mooney “let him loose” and put him up front. With the Canucks up 3-1 in the third, Tyler Arnason sealed the deal
on a nice feed from Hillzy ande he made a beautiful breakaway move to put the game away, scoring his 12th of the season. It is nice to watch Hill and Arny play together. They have great chemistry and feed off each other and they were rolling tonight. The
game ended with a couple of tussles as Wyatt Kemball dropped the mits for the first time in his career against Scott Mickoski who probably outweighed Wyatt by 50 pounds. Kemball traded punch for punch with Mickoski which could go down as the fight of the
year and brought the Canucks bench into a frenzy. After that the heavyweights were up as David Friesen took on Donnelly which ended up being a great tilt.

On Saturday the Nuckers took on the Vics. The Vics were up 4 points on the Nucks and this was a 4 point game. This time it was St. Vital who struck first 54 seconds in. The Nuckers answered late in the first as Graham Philp scored his 2nd of the season.
Philp has been playing his best hockey over the past 5 or 6 games. Arny kept his goal streak alive in the second scoring his 13th of the year from Hill. And after the Vics tied it up Tyler Meixner scored his 3rd of the season on the power play to put the
Canucks up for good. In the third Tyler Wiess made 11 saves including 3 incredible stops to secure the victory. Wiess stopped 37 of 39 and the Canucks move 2 points of the Vics and have taken 3 of 4 to win the season series. This weekend the Canucks only
have 1 game but it will be a big test as they take on the 1st place Raiders at home this Sunday at the Civic Centre. 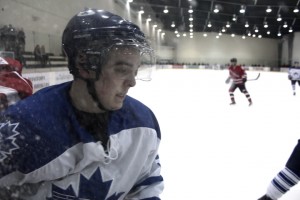 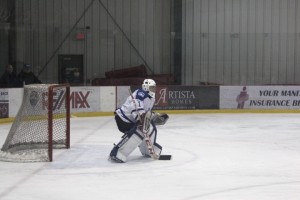 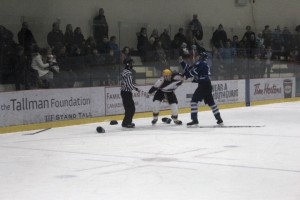