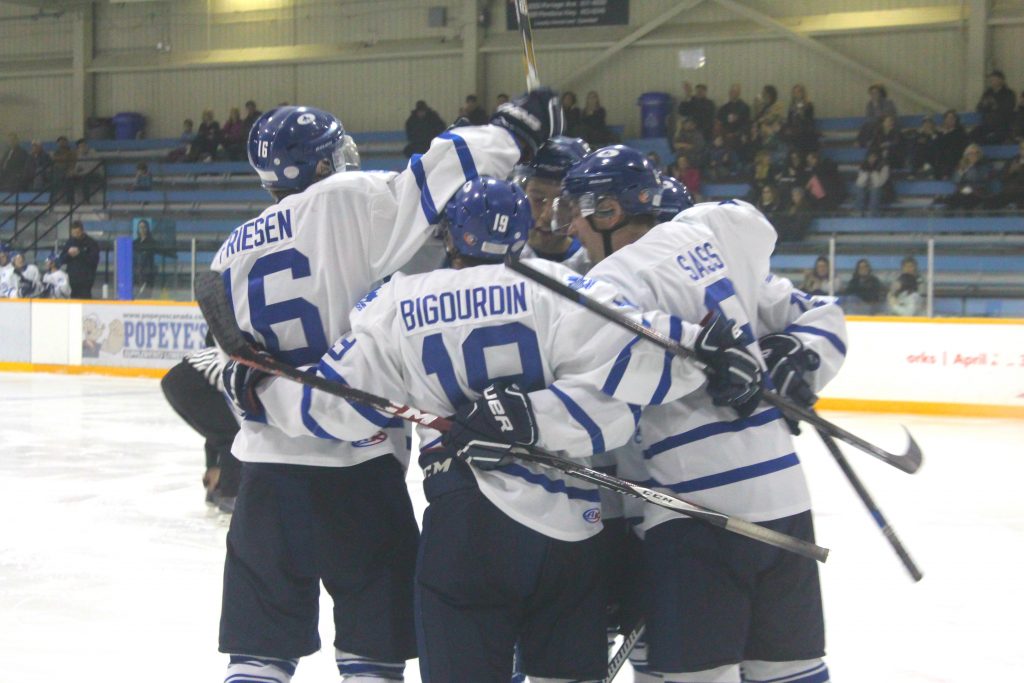 The Canucks kicked off the Thanksgiving Weekend with a first place showdown against the Pembina Valley Twisters in Morris on Oct. 7.

Despite a strong effort, the Canucks fell short 3-2 in overtime. It was their second loss of the season and dropped their record to 4-1-1.

Shane Bigourdon scored his first MMJHL goal in the game, with an assist by Justin MacKinnon. Mitchell Lockhart scored the other goal for the Canucks unassisted.

Tyler Weiss was solid in net, stopping 35 of 38 shots.

A week later, the Canucks went into Century Arena to take on the Ft. Garry / Ft. Rouge Twins.

It was a tough game for the Canucks, who surrendered six unanswered goals in a 7-3 loss.

The loss dropped the Canucks record to 4-2-1.

After two straight losses, the Canucks needed a bounce back effort against their cross-town rivals, the River East Royal Knights on Oct. 16.

They answered the bell, hammering River East 7-3. Six Canucks registered multiple points in the game, including David Friesen who had a goal and two assists, Ashton Fogarty and Josh Johnson had a goal and an assist each and Nick Stire, Adam Thurlbeck and Josh Wilkinson each chipped in with two assists.

Nathan Cvar picked up his first win in net, stopping 19 of 22 shots.

3 – David Friesen: Friesen had a goal and two assists during this three game stretch and is tied for the team lead in scoring by defencemen with Justin MacKinnon. Both of them have five points.

2 – Mitchell Lockhart: Lockhart continues to drive the Canucks offense, tallying a goal and two assists during this three game set. He has 12 points in eight games.

1 – Josh Wilkinson: Wilkinson is already making his presence felt in the Canucks lineup with three points in his first three games.