The Canucks headed into the weekend with some very tough opponents. Friday night it was the travel out to Stonewall the day after a nasty blizzard. Luckily the roads were fine however the blizzard seemed to move from outside into the Veterans Memorial Arena as that is what it felt like for the Canucks team.

It was just simply one of those nights. It’s like if you ever had a bad day and nothing seemed to go right, you just wished the day would end and another day would start. That is what Friday night felt like for the Canucks. Even when the Canucks tried harder things just seemed to go the other way. First period was a great example as the Canucks rang a few pucks off the iron only for the Jets to come back and pot 4 first period goals. And even after the Nuckers put up 15 shots, they found themselves down by 4. And when the Canucks scored to inch closer the Jets would answer right back. The end of the game couldn’t come soon enough and the final score was 9-3 Stonewall. The Canucks had goal scoring from Arnason (9th), Lockhart (10th) and John Taylor Piper call up Shane Bigourdin with his 1st as a Canuck on a penalty shot no less. Even with 40 shots the Canucks just could not seem to get anything going.

On Sunday the Canucks did their best to rid themselves of Fridays nightmare as they prepared to take on the cross bridge rival, Charleswood Hawks. This would turn out to be the most exciting game of the year so far. Two evenly matched teams trading blows throughout the night. The shots even ended at 31 a piece. The Canucks were determined to respond after Friday nights performance and that they sure did. The first period had no scoring but it was a very fast paced game. The Canucks finally broke the ice in the second as Shane Bigourdin scored his 2nd goal in as many games to give the Nuckers a 1-0 lead going into the third period. The Hawks tied it early in the 3rd but then once again it was Bigourdin scoring to put the team up 2-1. Bigourdin is known for his goal scoring prowess at the high school level but for him to come up as an underage player and produce the way he did this weekend is exceptional. It did not take long for the Hawks not only to even the score but take the lead as well as they went up 3-2 with 7 minutes to play. The Canucks began to push in the third and Mitchell Lockhart came through burying his 11th of the season from Stire and Big Mac (MacKinnon) with 3 minutes to play. The Canucks got a late powerplay and had the 4 on 3 advantage in overtime but could not put the puck by Thorlakson and this one went to a shootout. For the Nuckers this was their first shootout this season. Christian Vallance scored on a nifty deke but that was not enough as the Hawks outscored the Canucks in the shootout to prevail 4-3.

If this game is any indication of the level of play that we will see between the Hawks and Canucks this season, the next three meetings will be an absolute beauty to watch. And just imagine the intensity if these two teams meet up in the playoffs… 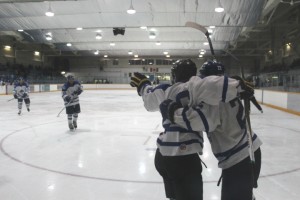 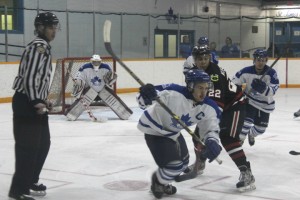 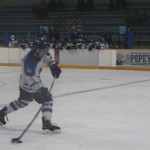