The time for playoff hockey was here! The Canucks were excited to make their return to the playoffs after not making it last season. There opponent was the Pembina Valley Twisters. The Twisters won the season series 3-2 and both teams were very evenly
matched. This series would provide a rollercoaster of emotions for all involved, an ongoing battle that sucked every ounce of energy out of both teams. For the people in attendance, they got there money’s worth and more. It reminded all of us why playoff
hockey is the most entertaining thing in sports.

The Twisters wasted no time in getting out to a quick series lead. Game 1 was a close affair, a tight defensive game where both teams were feeling each other out. The Canucks lost a close one 2-1 and would go back home for game 2. This game was one that
was a little puzzling as to what happened. The Twisters won handily 4-1 and the Canucks struggled to get anything going. But just when you thought the Canucks may have hit rock bottom game 3 came along. The Canucks got down 2-0 early in the game and just
when you thought the Twisters might walk away with the series, the Canucks woke up and started to dominate the game. The Nuckers speedy forwards started to pressure the Twisters defense and cause turnovers. They came back in the game and took a 6-4 lead
with 1:30 to go when one of the strangest turn of events took place which may be considered the turning point of the series. The Twisters pulled their goalie, scored 2 goals and tied the game. They scored a few minutes into overtime and stole game 3
right out of the hands of the Canucks. Unbelievable! I can tell you I’ve been apart of hockey as a player, coach and now executive and I have never seen anything like that. It was utter shock for the rest of that evening. The Canucks now had hit rock
bottom and trailed the series 3-0.

Just when you thought after what had happened to the Canucks the series just might be over in game 4. After all, the Canucks blew a late lead in game 3 and now trailed 3 games to none. I can tell you in my experience most teams in this position had
enough and were ready to concede. Even after the Canucks trailed in game 4, 2-1 after 2 periods, the future looked bleak, but don’t tell the players that. They were ready to write a new chapter to this series…

In the 3rd the Canucks peppered the Twisters and came back to win 3-2. The win came costly as it was later revealed top scorer Mitch Lockhart would be out for the rest of the playoffs with broken ribs, a huge blow to the Canucks offense. But the team
would come together. Game 5 in Morris was the Canucks best as they routed the Twisters 4-1 and were now back in the series! The Canucks now believed and the Twisters started to sense the urgency and game 6 would prove to be the most exciting game of the
series. The Civic Centre was packed and the Canucks were ready to go! They got down 5-3 in the third but scored with 6 minutes left, then with the net empty scored with one minute remaining to tie it up. The game went to double overtime where Tyler
Meixner scored his first of the series and the Canucks had come all the way back to tie the series at 3! Game 7 was back in Morris and you can just see that the Canucks had expended all their energy coming back in the series and just seemed to have
nothing left in the tank. They played their hearts out but fell a little short losing 5-2.

The series showed alot about the Canucks. it demonstarted a great deal of character and resiliency. The team had come a long way from last season. The culture in the room had changed to a team that cared about what they were doing. They gave everything
they had and never quit.

The team would like to thank the four 21 year olds that will be moving on: Tyler Arnason, Austin Hill, Riley Flynn and Scott Gallaher. A group that had to deal with the change of a new executive, coaching staff and a sharp turnover in players. This group
embraced the change and were leaders to the rest of the group. They worked extremely hard to make this team better from day 1 of training camp and the organization appreciates everything they have done. They will always be remembered for their leadership
and hard work in helping build the Canucks organization.

The exec would also like to thank the many people who contributed to the success of the Canucks this season: Coaches Blair Mooney, Matt Levins, Sean Martin and Logan Wasio for changing the culture in the room and turning the team back into a top
contender. Trainer Ashley Lund for putting in hundreds of hours, making sure our players were well looked after all season long. Director of Hockey Communications Stephen Burns for making the Canucks relevant to the world through social media and his
great photography all season long. Graham Jones for developing a top notch website that really connected with our fan base. Goal Judges Allan Risbey and Jim Alexander for their commitment at every home game. Jim will be moving on after this year and we
wish him all the best! Dustin Madrigga for timekeeping. Jim Mclachlan, Vicki Mclachlan, Ron Keats, Darlene Steeves, Dawn Mooney and Shirley Martin for working the door and 50/50 at every home game. We appreciate your efforts. Kathryn Falkenberg for
spending countless hours sewing on the name bars. Jim Steeves, making the sandwiches for all the players and staff after the long bus rides home from Morris. And thanks to the parents, familes and community members that came out to support the team this
season. Attendance was up from last season and we hope to continue to build on that! You cannot be successful without surrounding yourself with good people!

On the bus ride home, I couldn’t help but get a little excited as my mind took a glimpse into what next season might bring. Most of the team will be eligible to return and after this season and will be hungry to get back to the playoffs and make their
mark. It will be a group that returns it’s top 2 scorers, a large group of 21 year old veterans as well as a promising group of exciting, talented young players and tremendous goaltending. I have a feeling when we fast forward to next year at this time
we may see a different result! 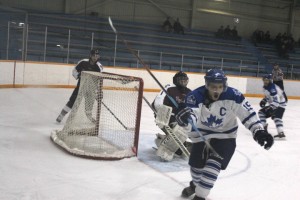 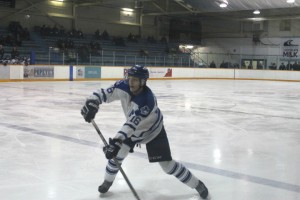 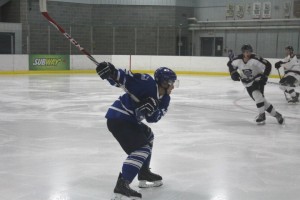 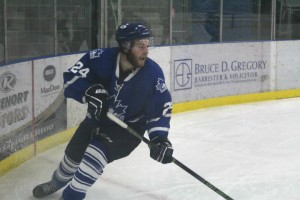