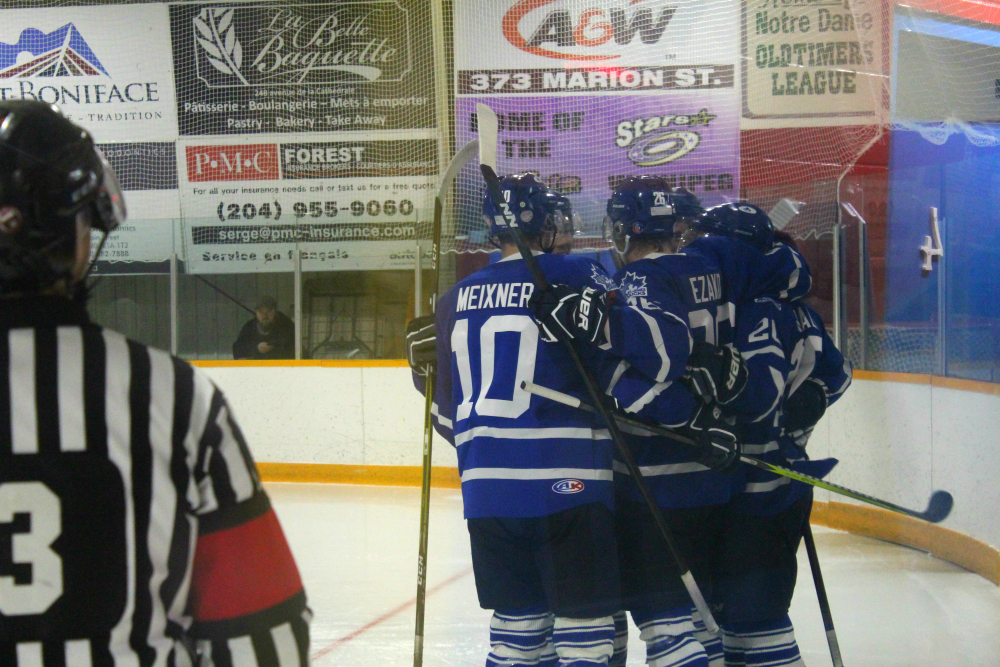 After a tough stretch where the Canucks dropped three of four, they looked to get back on track on Sunday, Oct. 29 when they hosted the St. Vital Victorias.

Two point games from Wyatt Kemball and John McCammon partnered with a solid defensive performance helped the Canucks knock off the Vics 4-2.

Adam Thurlbeck scored his first of the season just 1:47 into the game with assists from McCammon and Dylan Reinheimer. Not long after Chris Sass put home number three on the year as the Canucks jumped out to a 2-0 lead after the first period. St. Vital cut the lead in half just over three minutes into the second, but approximately 10 minutes later Justin Mackinnon restored the two goal lead to put the Canucks ahead 3-1 after two.

St. Vital cut the lead to one again midway through the third, but the Canucks snuffed out any further attacks and McCammon iced the win with his fourth of the year late in regulation. Kole Stockham, Tyler Meixner and Cole Chicoine all recorded assists in the game.

Tyler Weiss stopped 19 of 21 shots to pick up the win.

The Canucks then made a stop at Terry Sawchuk Arena on Nov. 3 where they dominated the River East Royal Knights 4-1.

The Canucks got off to a quick start with two goals and 14 shots in the first period. Just around eight minutes in, Kole Stockham buried his third of the year and just a few minutes later Adam Thurlbeck – who also had an assist in the period – scored his second to make it 2-0 Canucks after one. Kemball, Meixner and Sass also recorded assists in the period.

In the middle frame the Canucks played a good defensive period, giving up just two shots and scoring a third goal off the stick of Meixner to go up 3-0. Jeremy Idzikowski and Craig Weiss assisted on Meixner’s 3rd of the season.

McCammon scored five minutes into the third to put the Canucks up 4-0 and that would be more than enough, despite a River East goal in the ladder half of regulation.

Next up was a tough task against the league-leading Raiders on Nov. 5, who came into the match-up on a seven game heater.

That streak would grow to eight as the Raiders defensive game stood out in a 2-1 victory over the Canucks.

Kole Stockham got the Canucks on the board early in the first but that’s all the they could muster in the loss.

Nathan Cvar was solid in net, stopping 28 of 30 shots.

The Canucks would bounce back though on Nov. 9 with a 5-2 victory over the St. Boniface Riels at Notre Dame Arena. It was a game that included a star performance from the Canucks’ newest acquisition.

Tristan Ezako – who the Canucks traded for earlier this month – scored a hat trick in his second game with the team to lead the Canucks to victory. Justin Mackinnon and Tyler Meixner both had multi-point games.

Nathan Cvar picked up the win, stopping 38 of 40 shots.

The Canucks have a record of 7-8-1 this season, which is good enough to put them in 6th place, just one point behind the Vics.

3 – Tyler Meixner: Meixner had a goal and four assists during this four game stretch and is second in scoring for Canucks this season with three goals and 10 assists.

2 – Justin Mackinnon: Mackinnon’s offensive play has exploded as of late, as he recorded a goal and four assists during this four game segment. After a slow offensive start that saw him record just one assist in his first 10 games, he has two goals and four assists in five games since.

1 – Kole Stockham: Stockham has five points (2G 3A) over his last four games and is third in team scoring with four goals and 11 points.

The Canucks are in Transcona for an afternoon puck drop on Sunday Nov. 12 before hitting the road to Stonewall for a Friday night game on Nov. 17. Their next home game is Sunday, Nov 19 when they host the Charleswood Hawks.