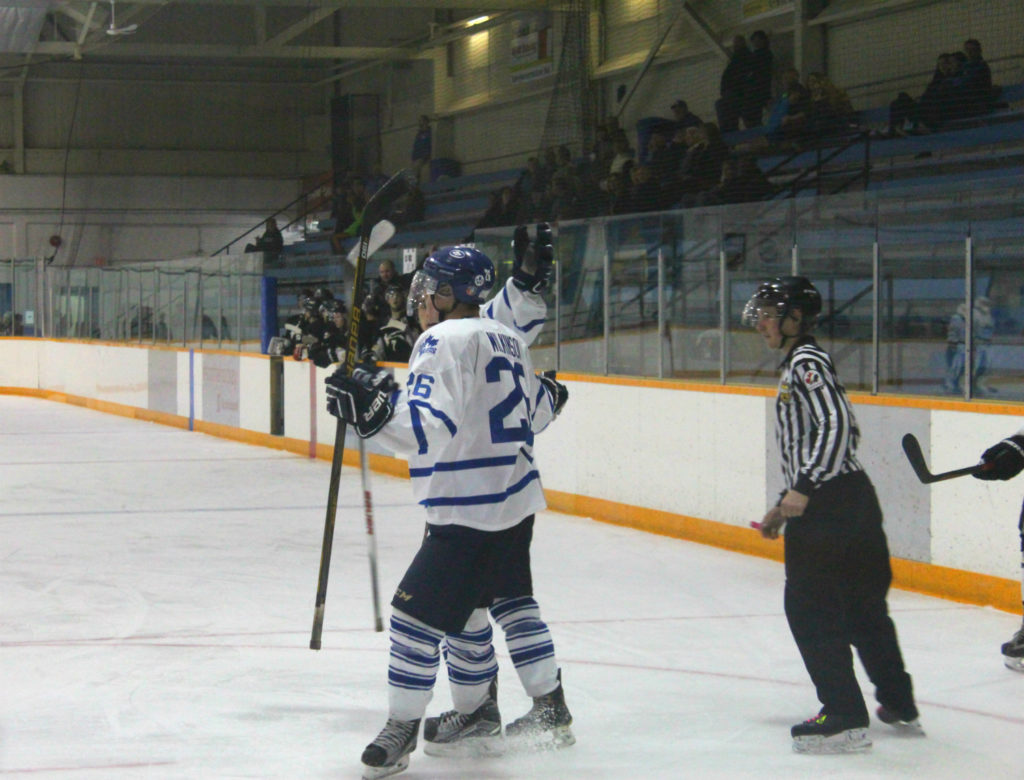 Following a tough shutout loss to the Charleswood Hawks on Oct. 13, the Canucks looked to get back into the win column against a tough Transcona team on Sunday Oct. 15 at the St. James Civic Centre.

Unfortunately, offensive struggles continued for the Canucks, who couldn’t muster a goal in a 3-0 loss to the Railer Express. Tyler Weiss turned aside 35 shots in the game as the Canucks’ record on the season dropped to 3-5-1.

Next up was a road trip to Morris on Friday, Oct. 20 to face the Pembina Valley Twisters. Despite building a 3-1 lead in the second period, the struggles continued as Pembina Valley scored five unanswered goals to hand the Canucks a 6-3 loss.

Wyatt Kemball scored twice and had an assists in the game. Dylan Reinheimer added the third goal for the Canucks and Tyler Meixner had a strong game with two assists. Jeremy Idzikowski also added an assist.

It was the third straight loss for the Canucks, who then looked to get back in the win column against St. Boniface on Sunday, Oct. 22.

Despite surrendering the first two goals of the game, the Canucks offence came alive in a 6-3 win.

The Canucks struck three times in the second period with goals from Wyatt Kemball, Craig Weiss and Cole Chicoine. Josh Wilkinson scored midway through the third to give the Canucks a 4-2 lead before the Riels answered to pull the game within one. Kemball scored his second of the game a short time later and Reinheimer added an insurance marker to seal the win.

In addition to their goals, Chicoine and Wilkinson has assists in the victory and Reinheimer recorded a three point night with two assists. Jeremy Idzikowski and Kole Stockham also recorded a pair of assists each in the game as the Canucks record improved to 4-6-1. Nathan Cvar stopped 29 of 32 shots to pick up his fourth win of the season.

The Canucks then tried to keep the momentum going against the Ft. Garry/Ft. Rouge Twins but came up just short in a 3-2 final.

Chris Sass notched his second of the season and Justin Mackinnon got his first as the Canucks jumped out to a 2-1 lead after 40 minutes. The Twins stormed back, scoring twice in the third period to take the victory.

Kemball and Idzikowski continued their point streaks with assists and Kieran Ursel and Adam Thurlbeck found their way onto the score sheet with assists as well. The loss brought the Canucks record down to 4-7-1.

3 – Jeremy Idzikowski: Idzikowski had four assists during this four game stretch and leads all Canucks’ defencemen in scoring with two goals and eight points in 12 games.

2 – Dylan Reinheimer: Reinheimer had a pair of goals and four points during this stretch.

1 – Wyatt Kemball: The captain has been the offensive leader for the Canucks this season, recording eight goals and 12 points in 12 games. During this four game stretch he had four goals and two assists.

The Canucks welcome the St. Vital Victorias to the St. James Civic Centre for an afternoon affair on Sunday, Oct. 29. They’ll then head to Terry Sawchuk Arena to face the River East Royal Knights the following Friday before returning home to take on the Raiders on Sunday, Nov. 5.