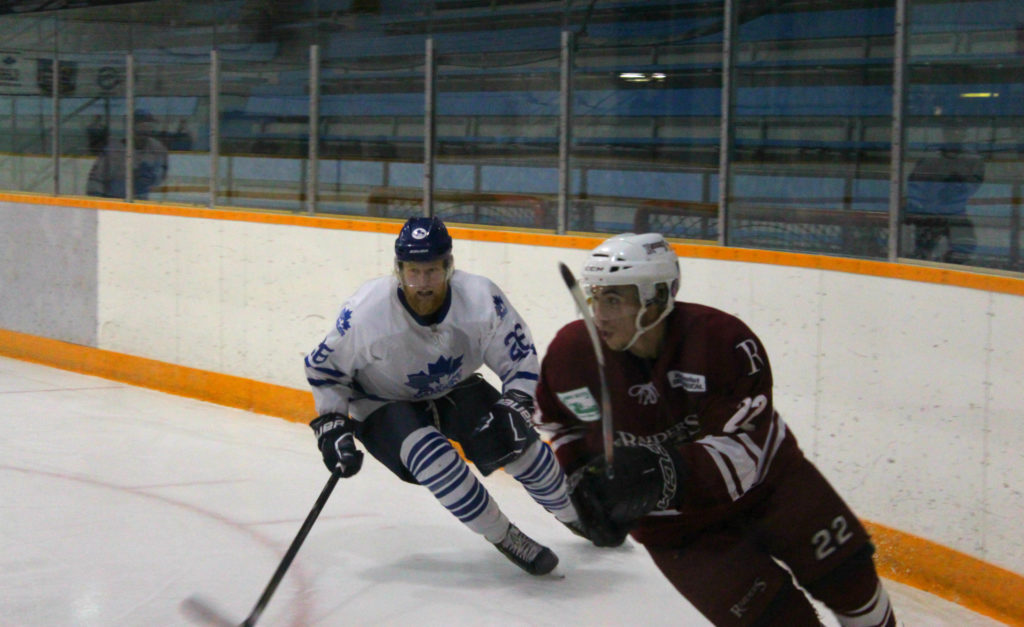 After ending the month of October with five straight wins, the Canucks looked to keep that momentum going as a new month began.

The Transcona Railer Express held a 3-1 lead heading into the third period and appeared to have the game under control until Tyler Meixner scored just under midway through the final frame. The Canucks followed that up with three more unanswered goals en route to a 5-3 comeback victory.

Meixner led the way with a pair of goals, and Jeremy Idzikowski (3A), Kole Stockham (1G 1A) and Chris Sass (1G 1A) also had multi-point games.

Nathan Cvar stopped 32 of the 35 shots that came his way to pick up the victory.

The win extended the Canucks’ streak to six in a row, and moved them within striking distance of first place in the MMJHL.

They would get that chance to strike soon after, as they welcomed the first place Raiders to the St. James Civic Centre on Sunday, Nov. 4.

And strike the Canucks did, as their offence exploded for double-digit goals in a 10-2 victory.

The Canucks got goals from nine different players and won the game with a completely balanced attack, as all four forward lines scored multiple goals in the game. The Canucks were lead offensively by Tristan Ezako (1G 3A) and John McCammon (2G).

After seven straight victories, the Canucks’ streak would unfortunately come to an end in Morris at the hands of the Pembina Valley Twisters on Saturday, Nov. 10.

The Canucks led 4-3 but the Twisters stormed back in the latter half of the third period, scoring three unanswered goals to take the game 6-4.

Tyler Meixner led the way offensively with two goals and an assist. Tyler Weiss took the loss in net.

After this three game stretch, the Canucks have a 9-3-1 record and sit third in the MMJHL standings, one point behind Pembina Valley and three points back of the Raiders.

3 – Kieran Ursel: Ursel continues to flourish offensively and had a goal and five assists during this three game segment. In 11 games played this year, Ursel has four goals and 12 assists.

2 – Jeremy Idzikowski: Idzikowski had five assists in these three games and has 11 points in 13 games this season, which is good enough for third in league scoring among defencemen.

1 – Tyler Meixner: Meixner’s six goals and two assists over the past three games have shot him to the top of the Canucks’ scoring leaders and put him within three points of the league lead. On the season, Meixner has 21 points (12G 9A) in 13 games and has registered at least one point or more in all but two of the Canucks’ games.

The Canucks play three games this week, starting on Tuesday Nov. 13 against the Charleswood Hawks at the St. James Civic Centre. On Thursday, Nov. 15 they pay a visit to the St. Vital Victorias before returning home to entertain the Ft. Garry/Ft. Rouge Twins on Sunday Nov. 18.