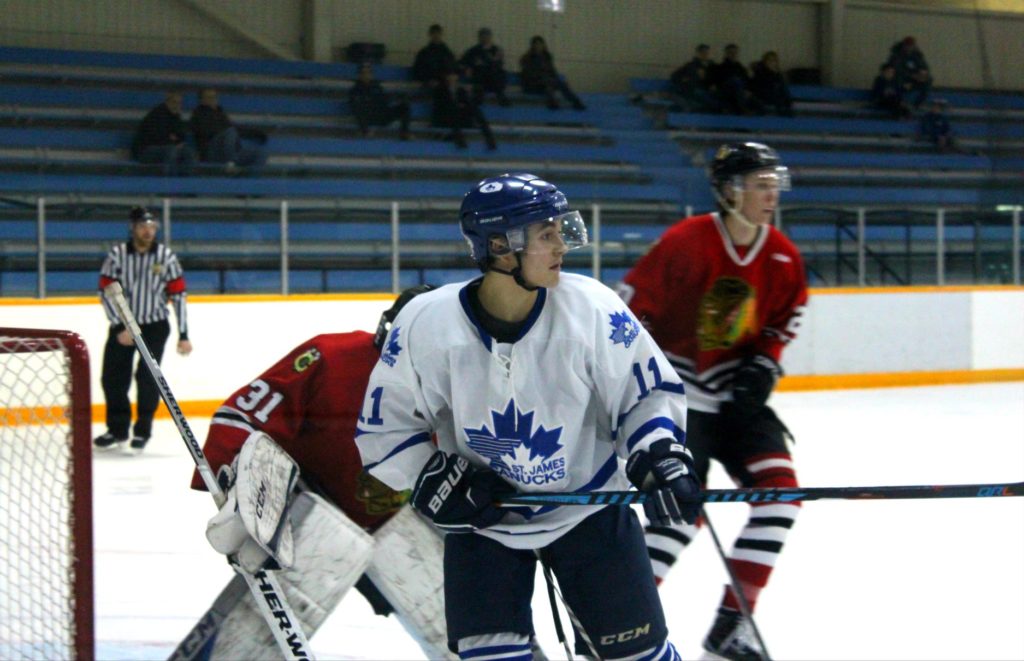 After seeing their win streak snapped at seven, the Canucks looked to get back to their winning ways as the month of November carried on.

That started with a game against their arch-rivals, the Charleswood Hawks, on Nov. 13.

Despite falling behind 2-0 in the first, the Canucks battled back and would go on to out shoot the Hawks 34-21 and win 4-3. Craig Wiess led the way with a goal and two assists, while Adam Thurlbeck (2A) and Jarrett Neudorf (2A) also had multi-point games.

Nathan Cvar picked up the win in net.

On Nov. 15, the Canucks headed to St. Vital to take on the Victorias. 10 different players registered a point en route to a 4-2 victory, which moved the Canucks’ record to 11-3-1. Cole Chicoine had a goal and an assist in the game and Nathan Cvar picked up his second straight win, making 31 saves.

The Canucks would then return to the St. James Civic Centre a few nights later, where they fell 2-1 in a shootout to the Ft. Garry/Ft. Rouge Twins despite putting 37 shots on net. Jeremy Idzikowski scored the lone goal for the Canucks, with an assist from Kieran Ursel.

Tyler Wiess was solid in net and took the tough luck loss.

On Nov. 22 the Canucks welcomed the River East Royal Knights to the St. James Civic Centre and fell 2-1. Tyler Meixner scored the only goal for the Canucks, with Tristan Ezako and Adam Thurlbeck assisting.

Cvar stopped 23 shots in the loss, which marked just the second time this season the Canucks have dropped back-to-back games.

The Canucks wrapped up this stretch by getting back into the win column in a resounding fashion on Nov. 24, as they beat up on the St. Boniface Riels 6-2 to improve their record to 12-4-2 and put themselves in a three-way tie for first place.

Chicoine led the way with two goals and Tyler Wiess stopped 39 shots to pick up the win.

3 – Jeremy Idzikowski – Idzy had two goals and three assists during this five game stretch and is now up to 16 points (4G 12A) in just 18 games. He is third in scoring among defenceman in the MMJHL and is just two points back of the leader.

1 – Cole Chicoine – Chicoine had four goals and an assist during this stretch and is now up to 14 points (7G 7A) in 18 games. He is already four points away from matching his season high from his rookie year in 2017-2018.

The Canucks wrap up the month of November on the 28th when they hit the highway north to face the Stonewall Jets. After that they open the final month of 2018 by hosting the Charleswood Hawks on Sunday, Dec. 2 and then visiting the Raiders on Friday, Dec. 7.