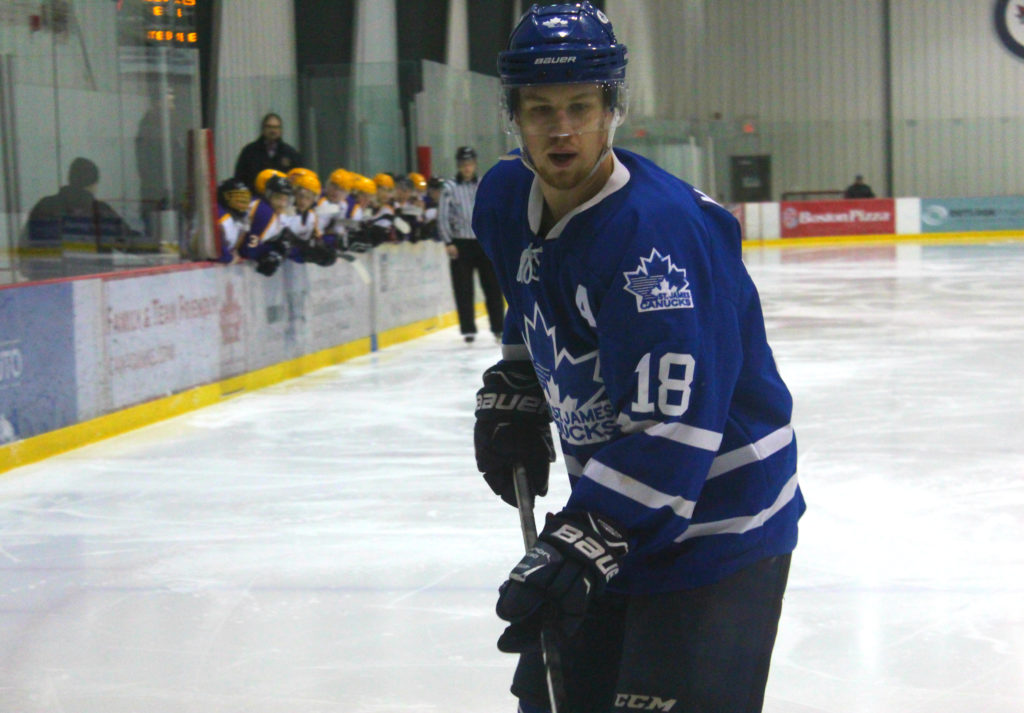 After opening 2018 with a pair of tough losses to the Twins and Raiders, the Canucks looked to get back on track at the Manitoba Major Junior Hockey League’s annual showcase at the Bell MTS Iceplex the weekend of Jan. 12-14, 2018.

That started with a Friday night match-up against the struggling River East Royal Knights.

22 saves by Tyler Weiss and big offensive nights for John McCammon and Tyler Meixner led the Canucks to a resounding 10-2 win.

McCammon got things started just 4:26 into the game and finished the night with a hat-trick and an assist. Meixner dominated throughout the evening, scoring twice and adding three assists.

Rookie defencemen Jarrett Neudorf and Nate Roffey both got on the score sheet for the first time this season with two assists each. Kole Stockham (2G), Dylan Reinheimer (2A), Jeremy Idzikowski (1G 1A), Josh Johnson (2A) and Jarrett Lynam (2A) also recorded multi-point games.

Wyatt Kemball and Tristan Ezako chipped in with goals and Shane Bigourdin added an assist.

The win brought the Canucks’ record up to 15-13-3 and put them nine points up on the final playoff spot.

The Canucks then had a big opportunity on the Saturday to distance themselves even further, in a game against the eighth place St. Vital Victorias.

A five goal first period helped the Canucks cruise to a 6-2 victory to wrap up the showcase.

Tristan Ezako scored twice in the first to up his goal total to 18 on the season. Chris Sass, John McCammon and Craig Weiss added goals as well, to help the Canucks take a commanding lead after the first period.

Ezako netted his 19th of the year in the second period and that would be more than enough, as the Canucks held off the Vics to pick up their second win in a row.

Tyler Meixner and Jeremy Idzikowski both recorded two assists in the game and Tyler Weiss stopped 38 of the 40 shots that came his way.

The win brought the Canucks’ record up to 16-13-3 and moved them one point behind Stonewall for fourth place in the league.

2 – John McCammon – McCammon had four goals over the weekend – one of which was shorthanded – and an assist. He is fifth in team scoring with 13 goals and 24 points in 28 games, and has six goals and nine points in his last five.

1 – Tyler Meixner – Meixner dominated during the showcase with two goals and six assists in two games. He leads the Canucks in scoring with 12 goals and 39 points in 32 games, and has 12 points in his last six games played.

The Canucks have some time off before opening up a tough stretch of games on Sunday, Jan. 21 at East End Arena against the Transcona Railer Express. After that, they will host the Charleswood Hawks on Friday, Jan. 26 before wrapping up the first month of 2018 in Stonewall on Jan. 27.