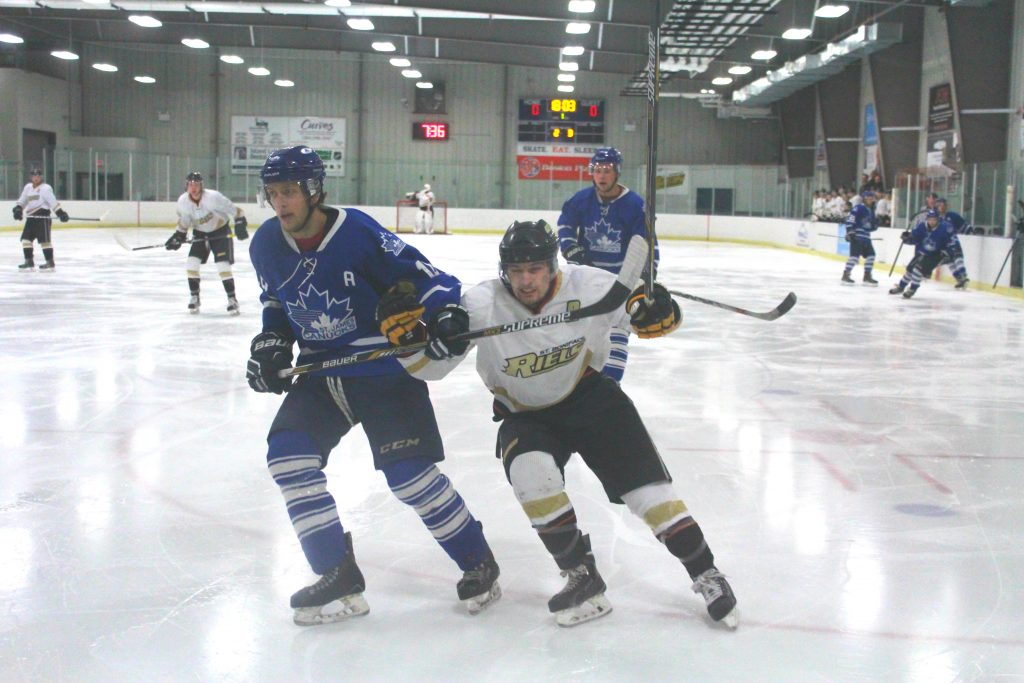 The Canucks looked to build some momentum at the end of January with a tough test against their arch-rivals, the Charleswood Hawks, on Jan. 31. Both teams came into the game struggling as the Canucks were losers of five of their past six and the Hawks losers of two in a row.

In a close game, the Canucks came up short in a 4-3 loss. Wyatt Kemball, Mitchell Lockhart and Dylan Reinheimer scored for the Canucks. Tyler Meixner had two assists and David Friesen, Justin MacKinnon and Nick Stire chipped in with assists as well.

Next up was a date with the St. Boniface Riels at Southdale Community Centre on Feb. 3.

Despite a comeback effort and another phenomenal game from the line of Stire, Lockhart and Meixner, the Canucks came out on the wrong end of a 7-6 shootout loss.

The Canucks were down 4-2 after two periods, needing a big third to get back into the game.

They got just that, scoring four times in the final frame to take a 6-5 lead. However, the Riels would find some heroics of their own, as Kris Sigurdson would score with just 12 seconds left to tie the game at six and send it to overtime.

The teams would trade chances in overtime but the goalies held strong, sending the game to a shootout. The Riels would eventually win, dropping the Canucks record to 21-12-2.

Stire and Lockhart both had five points in the game and Meixner recorded three assists as well. Over the past 10 games – including this one – that line combined for 51 points. Graham Philp and Josh Johnson also scored for the Canucks.

Call-up Bryce Ostermann, forward Eric Wankling and defenceman Jeremy Idzikowski all got on the score sheet with assists.

Things wouldn’t get any easier for the Canucks on Feb. 7, as they welcomed the league-leading Stonewall Jets to the Civic Centre. The Jets came into the game winners of three of their past five.

The Canucks would lose 4-1 score in a tight-checking game. Stire scored the lone goal for the Canucks, assisted by Lockhart and Meixner.

The loss extended the Canucks’ winless streak to three and dropped their record to 21-14-2.

They would look to get back on track on Feb. 10 when they headed to Ed Golding Memorial Arena to take on the Transcona Railer Express.

The Canucks took the opportunity to play the role of spoiler as they doubled up a Transcona team fighting for their playoff lives by a 6-3 score. Kemball scored twice, Devan Lobb, Nicholas Pierce, Lockhart and Friesen scored the four additional goals. Stire, Kole Stockham and Dylan Reinheimer all had two assists each and Philp, Lockhart and Wankling all recorded assists in the win as well.

The Canucks would then look to build on that win when they visited the Raiders on Feb. 12 to wrap up the second week in February.

Graham Philp would lead the Canucks to a 4-3 win, scoring twice in the contest. Tyler Meixner had a goal and an assist and Kemball, Thurlbeck, Reinheimer, Stire and Lockhart all had assist.

Nathan Cvar picked up his 13th win of the season stopping 28 of 31 shots.

3 – Tyler Meixner: Meixner had a goal and seven assists in this five game stretch and now has 41 points in 36 games this year.

2 – Mitchell Lockhart: Lockhart once again proved why he’s one of the top players in the league, scoring four times and adding six assists in this five game segment. He has already surpassed his career high in points and ranks third in league scoring.

1 – Nick Stire: The captian has been a steady offensive force of late and had three goals and seven assists in these past five games.

The Canucks were in Morris last night to take on the Twisters in a pivotal match-up in the standings. On Sunday, Feb. 19 they’ll welcome the Charleswood Hawks to the Civic Centre to kick off a two game home stand.