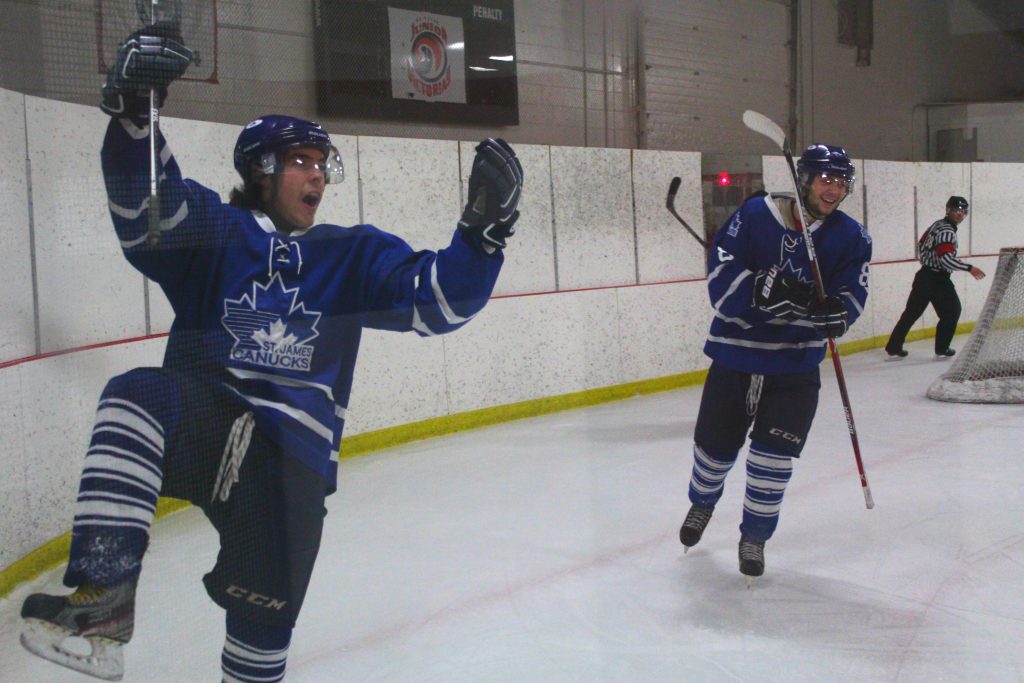 The Canucks came into the MMJHL Showcase weekend (Jan. 13-15) winners of eight of their past 10 games, looking to build on that record against two tough opponents.

Things did not go as planned on Friday, Jan. 13, when the Canucks dropped a 6-4 decision to the Ft. Garry/Ft. Rouge Twins at the MTS Iceplex. Mitchell Lockhart had a pair of goals in the game while Chris Vallance and Adam Thurlbeck scored as well. Lockhart, Nick Stire, Tyler Meixner, Jarrett Lynam, Kole Stockham and Jeremy Idzikowski all chipped in with assists in the loss. For Lockhart it was his 11th multi-point game of the season.

The next night the Canucks tried to get back on the horse against the Stonewall Jets, but struggled out of the gate, eventually losing 8-3. Shane Bigourdon scored a pair of goals in the game and Eric Wankling scored the Canucks’ third goal with his first of the season. Stockham, Nicholas Pierce, Justin MacKinnon and Stephane Nukapiak had assists in the loss.

The two losses during the showcase made it three in a row for the Canucks, and their record dropped to 19-11-1.

After the showcase was over the Canucks tried to get back on track against the St. Vital Victorias on Jan. 19.

That did not go as planned either, with the Vics getting the better of the Canucks, 6-4.

Wyatt Kemball scored twice in the loss and Nukapiak and Devan Lobb both recorded a goal and an assist. Stockham continued his offensive surge with two assists in the game and Thurlbeck and Pierce also chipped in with assists.

The loss brought the Canucks’ losing streak to four, and they wouldn’t have it any easier in their next game, taking on the league-leading Pembina Valley Twister on Jan. 22.

Despite this challenge, the Canucks rediscovered their game in a total-team effort, skating to a 7-4 win over the Twisters at the St. James Civic Centre.

Dylan Reinheimer and Wyatt Kemball led the way for the Canucks, both scoring two goals and adding an assist. Stire, Lockhart and Bigourdon also had multi-point games in the win.

After that the Canucks looked to make it two in a row with a showdown against the River East Royal Knights at Terry Sawchuk Arena on Jan. 27.

In a dominating performance, the Canucks cruised to a 9-2 win, bringing their record to 21-12-1 on the season.

The top line of Lockhart, Stire and Meixner led the way combining for 14 points in the game. Kemball, Reinheimer and Philp also had multi-point games.

3 – Wyatt Kemball: Kemball had five goals and two assists in this four game stretch and has emerged as one of the Canucks’ offensive leaders, despite only playing 18 games. He now has 15 points (7G – 8A) this season.

2 – Nick Stire: The captain continues to find his offensive game on the top-line, recording three goals and five assists for eight points in these past four games. He has 17 points over his past 10 and 37 points in 29 games this season.

1 – Mitchell Lockhart: Lockhart almost always appears in the three star selection and for good reason. In this four game segment he had four goals and seven assists for 11 points and he has a whopping 22 points in his past 10 games. This season Lockhart has 27 goals and 25 assists and is just five points away from surpassing his career high of 57 points he set last year. In his 32 games this season, he has only been held pointless five times and is tied for third in league scoring behind only Zach Heisinger (Charleswood) and Riley Beauchemin (St. Vital.)

The Canucks will make the short drive over the Moray Bridge to face the Charleswood Hawks on Tuesday, Jan. 31. On Friday, Feb. 3 they’ll head to Southdale Community Center to face the St. Boniface Riels and then on Tuesday, Feb. 7 they’ll host the league-leading Stonewall Jets.