The Canucks came into their first round series against the Ft. Garry/Ft. Rouge Twins knowing it would be a tightly contested match-up, regardless of where the teams finished in the standings. The Canucks finished up as the third seed in the regular season and the Twins finished sixth.

Game One did not disappoint, as the Canucks went on to win a dramatic thriller 4-3 in overtime.

The Canucks fell down early in the first, giving up two goals in the opening 10 minutes. They’d find some life towards the end of the period though when Dylan Burton tallied for his first of the playoffs.

Tyler Meixner tied the game in the second before the Twins grabbed the lead back heading into the third. After a tight checking third almost went scoreless, Canucks’ captain Wyatt Kemball came up clutch with the net empty to score the tying goal with 43 seconds remaining in regulation.

Rookie defenceman Cam Danylchuk then scored in overtime to give the Canucks a 1-0 series lead. Tyler Wiess stood tall in net, stopping 34 of 37 shots.

Game Two saw a similar scenario, as the Canucks gave up the first three goals of the game but scored four unanswered to win 4-3.

Tyler Meixner, Craig Wiess, Tristan Ezako and Justin MacKinnon scored the goals for the Canucks, who took a 2-0 series lead. Wyatt Kemball had a pair of assists, and Meixer and Adam Thurlbeck also recorded assists.

Tyler Wiess was solid in net again, stopping 38 of 41 shots.

In game three the Canucks flexed their muscles, scoring the first three goals of the game en route to a 3-1 win. Eric Wankling and rookie Ryan Ostermann tallied in the first period for the Canucks, with Wyatt Kemball adding a third late in the second.

Jack Cowell got the Twins on the board in the third but it wasn’t enough as Tyler Wiess shut the door the rest of the way to pick up his third win in a row.

The victory gave the Canucks a demanding 3-0 series lead.

The Twins, however, would get into the win column in Game Four of the series at Century Arena with a 4-1 victory. Ryan Ostermann scored the only Canucks goal, unassisted.

Game Five came back to the St. James Civic Centre, with the Canucks determined to cut the series short.

They would do just that, with a 4-2 victory.

Despite trailing after the first period, the Canucks scored three goals in a row to jump out to a lead in the third. Cole Zadro made it close for the Twins, but John McCammon sealed it for the Canucks with an empty net goal.

Ryan Ostermann (2) and Tyler Meixner also scored in the 4-2 win, which ended the series in five games.

3 – Wyatt Kemball – Kemball had five points in five game and scored some huge goals for the Canucks.

2 – Tyler Wiess – The 4th year netminder was solid throughout the whole series, tossing up a 4-1 record and a .922 save percentage in five games.

1 – Tyler Meixner – Just like he did in the regular season, Meixner continued to be an offensive leader for the Canucks in the first round of the playoffs. In the four games he played, the 21-year-old had three goals and four assists.

The Canucks await the winner of the Transcona Railer Express and St. Vital Victorias, with the two teams set to play Game Seven in St. Vital on Thursday, March 28, 2019.

The Canucks’ second round series will start in the days following that game 7. 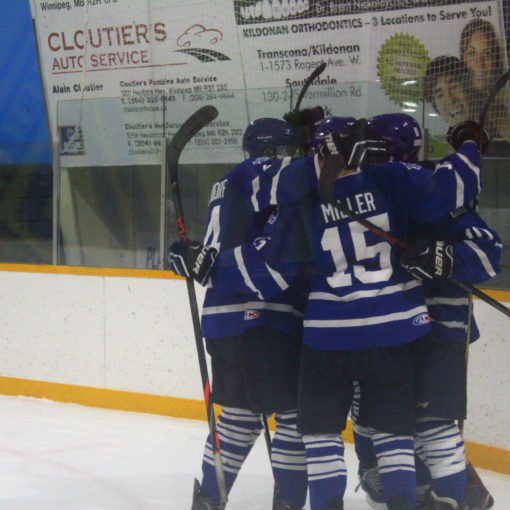 With the MMJHL standings jam packed, the Canucks looked to improve their position as they continued the month of November. It started […]

Thanks to the Grey Cup, the Canucks only had one game this weekend. It was Friday night and the Canucks had a […]