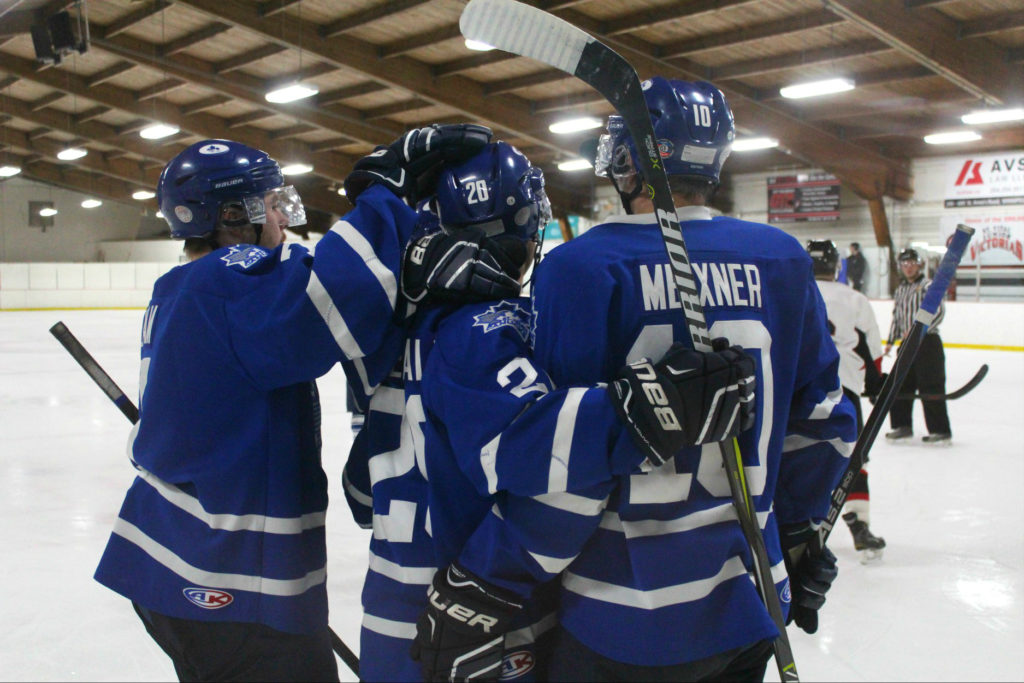 After wrapping up a tough stretch to end the month of January, the Canucks came into February determined to climb the standings to grab home ice advantage for the first round of the playoffs. They were in tough, however, taking on teams right in the thick of the battle for the final playoff spot.

First up was a game in Morris against the Pembina Valley Twisters on Saturday Feb. 3.

Cole Chicoine scored twice and Tyler Weiss turned aside 46 shots, as the Canucks skated to a 5-0 win over Pembina Valley. John McCammon, Shane Bigourdin and Dylan Reinheimer also had goals for the Canucks, who improved to 18-14-4.

Next up was a match-up with the St. Vital Victorias on Thursday, Feb. 8.

The Canucks were down 2-1 after 20 minutes but stormed back and dominated the rest of the game en route to a 6-3 win. Chicoine recorded his second straight two goal game and Reinheimer, Bigourdin, Wyatt Kemball and Tristan Ezako also scored. Tyler Weiss stopped 22 of 25 shots for his second straight win.

The Canucks looked to keep the momentum when they hosted the Ft. Garry/Ft. Rogue Twins the following night.

Despite putting 34 shots on net, the Canucks couldn’t muster any offence until it was too late in a 3-1 loss. Jeremy Idzikowski scored the lone goal for the Canucks and Nathan Cvar took the loss in net as their record fell to 19-15-4.

The following Monday, the Canucks headed to St. Boniface where they took on the Riels. Tristan Ezako led the way with a hat trick as the Canucks took the game 6-3. Chicoine, McCammon and Bryce Ostermann also scored in the win. Cvar stopped 22 shots to pick up his 9th victory of the season.

This stretch of games wrapped up with a tough test against the first place Raiders Junior Hockey Club on Friday, Feb. 16.

The Canucks fought hard in a tightly contested game, but lost 4-2.

Idzikowski and Kemball scored for the Canucks and Cvar stopped 23 of the 26 shots he faced. The loss dropped the Canucks’ record to 20-16-4.

3 – John McCammon – McCammon had two goals and four assists during this five game stretch and now has 16 goals and 32 points in 36 games this year.

2 – Cole Chicoine – Chicoine was on a goal-per-game pace during this stretch and now leads the Canucks in rookie scoring with 17 points. He has seven goals in his past eight games.

1 – Tristan Ezako – Ezako had four goals and four assists in this five game segment and has 20 goals and 33 points in 26 games since joining the Canucks. In 39 games between the Canucks and River East this year, Ezako has 23 goals and 40 points.

The Canucks have a busy week with three important home games. On Sunday, Feb. 18 they host the River East Royal Knights and then they’ll welcome the Stonewall Jets to the Civic Centre on Tuesday, Feb. 20. They’ll wrap up the week with a Friday night match-up against Transcona.