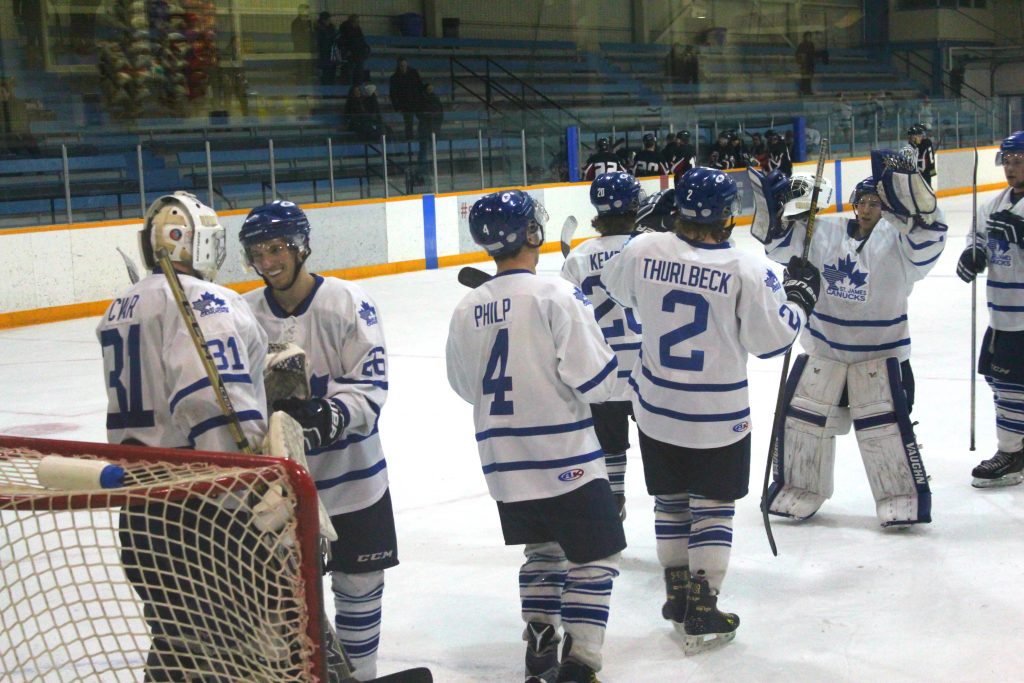 After a huge win over the Pembina Valley Twisters and a tough-luck loss against the Charleswood Hawks, the Canucks kicked off the second last weekend of the MMJHL season with a match-up against the St. Vital Victorias, a team that seemed to have their number all year having won three of the past four meetings.

The game also marked the second annual St. James Community Club Night, in which players and parents from club teams in the St. James area attended the game. The Canucks were also luck enough to be joined by MLA Scott Johnston, City Councillor Scott Gillingham and Dwayne Schmidt, the President of the St. James Assiniboia Minor Hockey Association, who dropped the ceremonial puck.

The Canucks came out strong in a wild first period, scoring five times while giving up a pair to head into the locker room up 5-2 after 20 minutes.

Kole Stockham scored his 4th to open the scoring when Wyatt Kemball fed him a breakaway pass out of the penalty box. The Vics would answer less than three minutes later when Troy Brown scored his 13th, followed by former Canucks Mathew Carey potting his 3rd midway through the first period.

The Canucks bounced back in the ladder half of the opening frame, scoring four unanswered goals in the final eight minutes of the period. Eric Wankling evened things up with his third, assisted by Josh Johnson and Justin MacKinnon. After that Graham Philp scored twice, both assisted by Kemball, to put the Canucks ahead 4-2. Philp then assisted on Chris Sass’ 8th of the season to put the Canucks ahead 5-2 after 20 minutes.

Nick Stire opened the scoring in the second period with his 18th of the season, assisted by Tyler Meixner and Mitchell Lockhart, but Carey answered back towards the end of the period with his second of the game to cut the lead to 3. The Canucks led 6-3 after 40 minutes.

The Canucks didn’t wait long to add to their lead in the third as Nicholas Pierce deflected his 9th past the Vics’ goaltender to make it 7-3. Jeremy Idzikowski drew the lone assist on the play. The top line would put the game to rest when Meixner sniped home his 16th to make it 8-3. Mitchell Lockhart had the only assist on the final goal.

The win brought the Canucks record to 25-15-2 and inched them closer to home ice advantage in the playoffs. A win in their next game against the Ft. Garry/Ft. Rouge Twins on Sunday, Feb. 26, would seal home ice for the Canucks.

Despite pumping 50 shots on net – including 22 in the third period alone – the Canucks fell 4-2 to the Twins.

Graham Philp and Tyler Meixner scored the Canucks’ goals. Nick Stire had a pair of assists and Mitchell Lockhart and Adam Thurlbeck also had assists.

The loss dropped the Canucks record to 25-16-2 with two games remaining in the season. They are now in a third place tie with the Pembina Valley Twisters.

3 – Nick Stire: Stire had a goal and an assist during this two game stretch. He now has 18 goals and 37 assists in 38 games.

2 – Tyler Meixner: Meixner had two goals and an assist this past weekend. He has 44 points in 39 games this season and seven points over his past five games.

1 – Graham Philp: Philp had three goals and an assist during this segment and is the Canucks leading scorer on defence with 23 points in 37 games.

The Canucks have clinched a playoff spot but are still jockeying for position in the playoff chase. They are tied with Pembina Valley for third place at 52 points. They will host the St. Boniface Riels at the St. James Civic Centre at 7:30 pm. Then they wrap up the regular season at home on Sunday against the River East Royal Knights. Puck drop for that game is 2:45 pm.