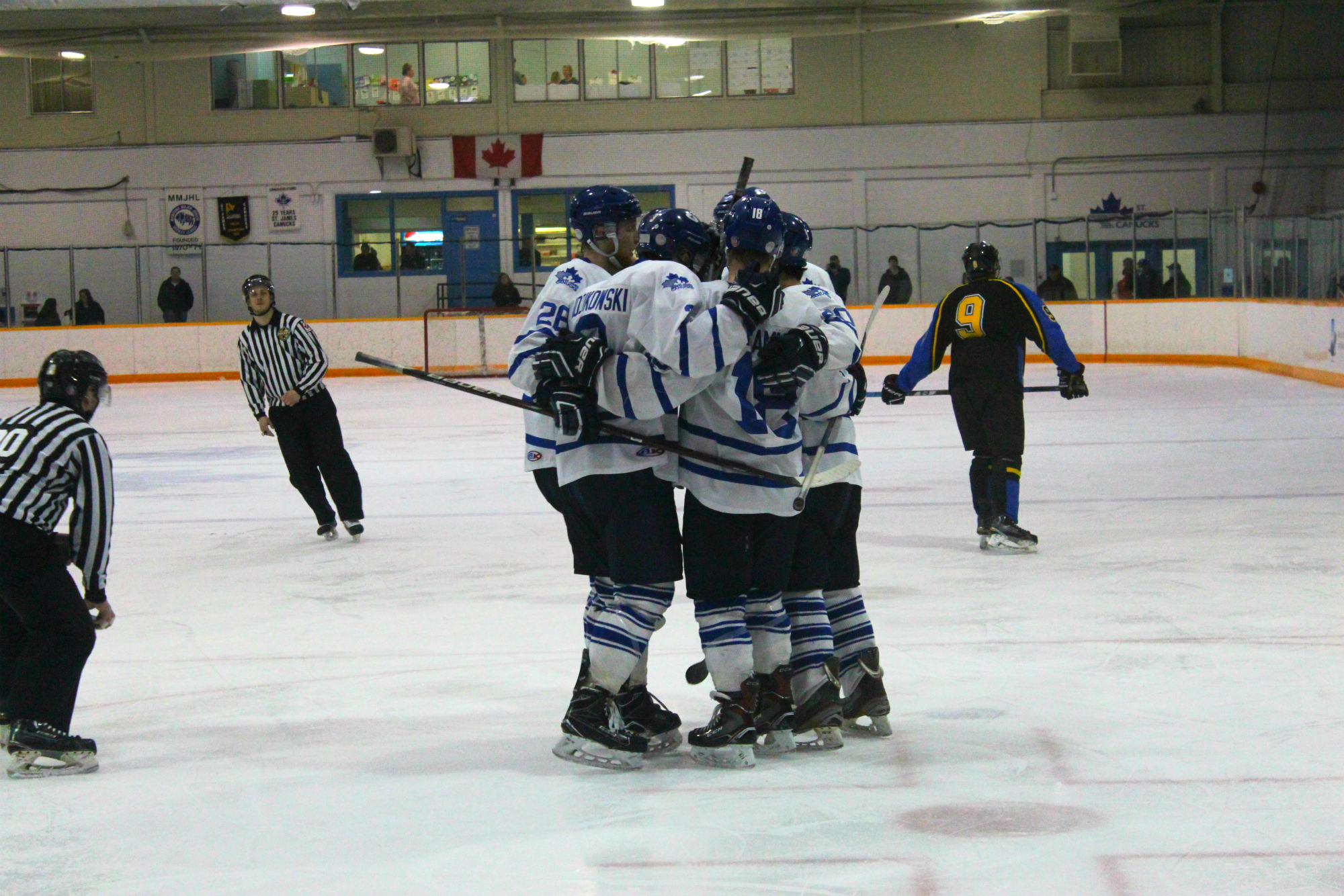 The Canucks came into the final three games of February with four wins in their past six games and looked to stay on their path to securing home ice advantage in the first round of the playoffs.

That started with an afternoon game against the River East Royal Knights on Sunday, Feb. 18.

Canucks’ leading scorer Tyler Meixner led the way with a hat trick and two assists as the Canucks downed River East 8-0 at the Civic Centre that afternoon.

Chris Sass and John McCammon opened the scoring in the first as the Canucks out-shot the Royal Knights 16-7 to jump out to a 2-0 lead. In the middle frame, the Canucks broke the game open with four goals, two off the stick of Meixner and singles by Kole Stockham and Tristan Ezako. Shane Bigourdin extended the Canucks lead to 7-0 early in the third, and Meixner scored his third just under 30 seconds later to make it 8-0.

McCammon, Stockham, Sass and Bigourdin all had a goal and an assist in the game and Canucks’ captain Wyatt Kemball chipped in with an astounding five assists. Tyler Weiss picked up win number 12 on the year, stopping all 18 shots he faced as the Canucks improved to 21-16-4 on the season.

Next up was a Tuesday, Feb. 20 match-up with the Stonewall Jets, who trailed the Canucks by one point in the standings heading into the game.

Despite trailing after two periods, the Canucks stormed back and scored three unanswered goals for a 5-4 overtime victory.

The Canucks trailed 1-0 after 20 minutes but got off to a good start in the second, as Kole Stockham and Tristan Ezako scored 45 seconds apart to give the Canucks a 2-1 lead. The Jets stormed back, however, scoring three times in the second half of the middle period to lead 4-2.

Chris Sass scored midway through the third period to cut the lead to one and John McCammon tied the game with a power play goal just a few minutes later.

Sass and Stockham both had a goal and an assist and Nathan Cvar picked up the win in relief, stopping all 13 shots he faced. The win moved the Canucks’ record to 22-16-4 and gave them a bit more breathing room in the race for fourth place and home ice advantage in the first round of the playoffs.

The Canucks wrapped up the month of February with a tough Friday night showdown against the 3rd place Transcona Railer Express, who came into the game winners of five of their past seven.

The Canucks went to extra time for the second straight game but came out on top 2-1 in overtime to pick up their third win in a row.

Meixner scored his 17th of the season on the power play at 14:08 of the first period and that was the only goal in the first 40 minutes. The Railer Express tied the game midway through the third to send it to overtime, where Adam Thurlbeck buried his 7th of the season to give the Canucks the win.

Nathan Cvar picked up his second straight win, stopping 32 of the 33 shots he faced. He also recorded an assist on the overtime winner.

The win improved the Canucks’ record to 23-16-4 heading into the final stretch of the season.

2 – Wyatt Kemball – The captain had a goal and six assists during this three game win streak and is tied for second in team scoring with 44 points (19G 25A).

1 – Tyler Meixner – Meixner had four goals and two assists in the past three games and has crossed the 50 point mark, which also marks a career high for him. He has 19 points (7G 12A) in 15 games since the start of 2018.

The Canucks have two more games before the 2018 MMJHL playoffs begin and are still looking to lock down 4th place. They will take on the Hawks in Charleswood on Friday, March. 2 before finishing the regular season at home against the St. Boniface Riels on Sunday, March 4.