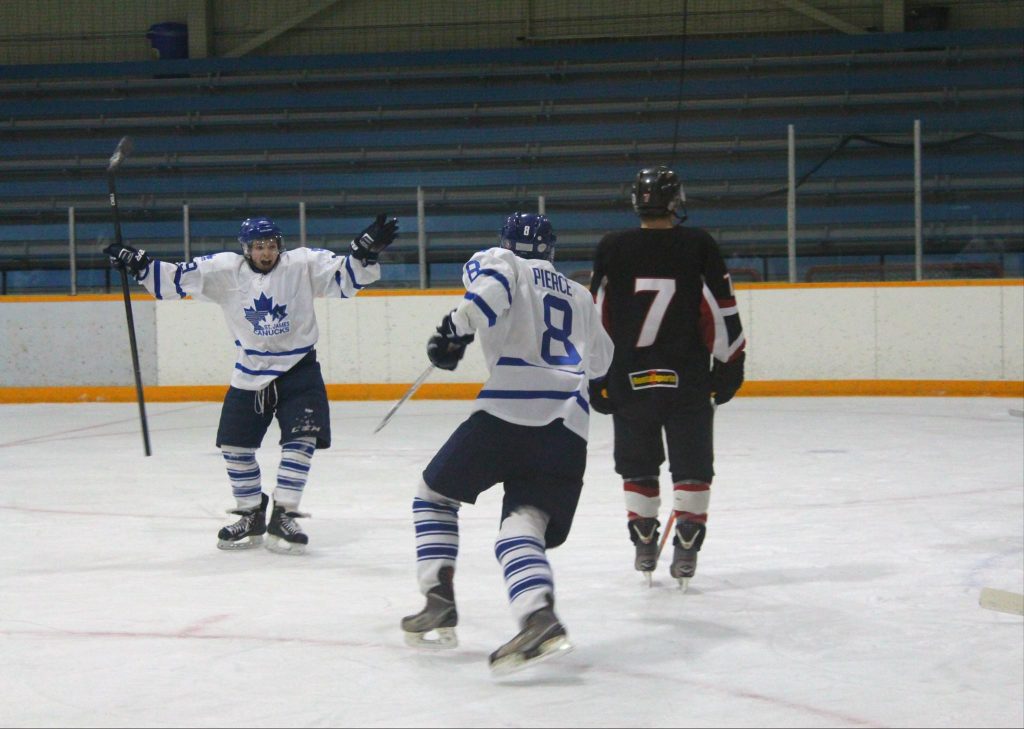 Despite a lopsided loss to the Raiders earlier in the month, the Canucks came into the second weekend in December winners of five of their last six games, looking to build on their recent success with two weekend games.

It started with a showdown against the Pembina Valley Twister, one of the leagues top teams, on Friday, Dec. 9. In a tight-checking, evenly matched game, the Canucks were able to come out on top, largely due to the goal-tending of Tyler Weiss, who picked up his second shutout of the season in the 1-0 victory.

The game’s only goal would come at 16:09 of the second period, when Chris Vallance buried his second of the season. Mitchell Lockhart and Graham Philp assisted on the power play marker, which would stand up as the games winning goal.

Weiss stopped all 37 shots he faced for his eighth win of the season.

On Sunday, Dec. 11 the Canucks hosted a team that seemed to have their number this season in the St. Vital Victorias. St. Vital had won the previous two meetings against the Canucks, coming into the game with four players in the top-20 in league scoring.

The Canucks were able to shutdown the Vics high-scoring top-line despite missing some key players due to injury, holding them to just one goal in a 4-1 victory.

The Canucks were all over the Vics in the first period, out-shooting them 14-8. The only goal of the period came off the stick of Chris Vallance during a late power play. It was his second goal in as many games. Nicholas Pierce and Graham Philp were credited with the assists. It was 1-0 Canucks after 20 minutes.

The Vics would tie the game late in the second period and that’s where the game stood after 40 minutes, despite the Canucks holding a 24-16 advantage in shots.

The Canucks had a 5-on-3 to start the third and made good on it at Mitchell Lockhart buried one to put the Canucks ahead 2-1. Jeremy Idzikowski and Wyatt Kemball set up Lockhart’s team leading 15th of the year. Justin MacKinnon added an empty netter late in the third and Stephane Nukapiak iced it at 18:59 of the final frame after picking the goalies pocket and burying it into a wide open cage. Shane Bigourdon assisted on MacKinnon’s 2nd of the year and Devan Lobb and Kole Stockham assisted on Nukapiaks 2nd.

The two wins brings the Canucks record to 15-8-1, and tied for first place in the MMJHL with Pembina Valley.

3 – Mitchell Lockhart: Lockhart scored a goal and had an assist to add to his team-leading point total. He has 30 points in 22 games and is

2 – Tyler Weiss: Weiss stopped all 37 shots he faced against Pembina Valley for his second shutout of the season in a big rebound performance. He’s 8-6-1 on the season.

1 – Chris Vallance: Vallance had two power play goals this past weekend and now has three on the year. In total he has 10 points in 20 games played this season.

The Canucks have a relatively light schedule in the next couple of weeks with just two games remaining before the holiday break. On Friday, Dec. 16 they’re at Terry Sawchuk Arena to face the River East Royal Knights. On Friday, Dec. 23, they host the Ft. Garry/Ft. Rogue Twins at the St. James Civic Centre to wrap up the unofficial first half of the season.